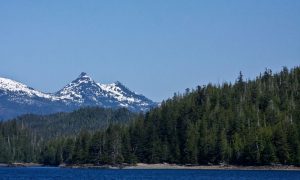 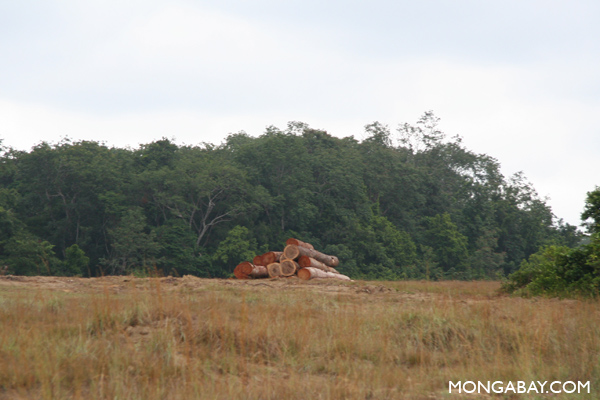 Logging in Gabon. Photos by Rhet A. Butler
Environment

Selective logging is causing long-term changes to tropical forests in Africa by facilitating the growth of weeds and vines, which reduces plant diversity and diminishes carbon storage, reports a new paper published in the journal Ecological Research.

The paper, led by Roberto Cazzolla Gatti of the University of Tuscia and the Euro-Mediterranean Centre for Climate Change, is based on field data from more than 500 plots in Sierra Leone, Ghana, Cameroon and Gabon. The researchers compared several traits across primary, selectively-logged, and secondary forests to evaluate the impacts of selective timber harvesting on forest structure. They found that even low-intensity logging causes sustained ecological changes to African forests.

“We show that the effects of selective logging are greater than those expected simply from the removal of commercial species, and can persist for decades,” the authors write. “Selective logging, unless it is practiced at very low harvest intensities, can significantly reduce the biomass of a tropical forest for many decades, seriously diminishing aboveground carbon storage capacity, and create opportunities for weeds and vines to spread and slow down the ecological succession.”

Gatti added that the impacts are noticeable even at extraction rates of 1-2 trees per hectare.

The findings are significant because logging is the most widespread form of land use in tropical forests. The results add to a growing body of evidence indicating that selective logging is not as benign as forestry interests typically suggest.

“This is one of the first studies which approaches the effects of ‘sustainable’ selective logging not only on wildlife but directly on trees diversity and biomass,” Gatti told mongabay.com. “In other terms, it demonstrates that the negative effects, even at small logging volumes, is evident on selectively logged forests and it worsens with time.”

Given these — and other — findings, the researchers suggest that certification schemes like the Forest Stewardship Council (FSC) that sanction first-time logging of old-growth forests as responsible forest management may be inherently unsustainable from an ecological standpoint.

“There appears to be a consensus that selective logging causes relatively minor disturbance and is thus acceptable within the requirements of some certification schemes such as the Forest Stewardship Council (FSC),” they write. “However, evidence of long-term effects of selective logging on carbon sequestration and biodiversity is poor and sometimes overlooked, particularly in Africa, despite the increasingly wide adoption of this practice.”

The authors conclude by arguing that policymakers and conservationists shouldn’t overlook forest degradation caused by logging when evaluating strategies for managing and preserving forests.

“This paper suggests that selective logging has several important negative effects on forest structure, dynamics, biodiversity and ecosystem services and that these effects can be truly evaluated only in the long term by analyzing the evolving dynamics of repeated logging and not the mean structural values but the indices linked to the arboreal density,” they write.

“The attention should be paid not just to totally destructive practices such as deforestation (clear-cutting) for alternative land uses (crops or grazing, commonly in the Amazon, or the palm oil plantations that are typical of South-east Asia), but also to the selective logging of the last virgin forests of Africa, which may be a more serious cause of forest degradation than what has been thought to date. These first results suggest that it will be crucial to increase research about the key question for forest management and conservation: is selective logging really sustainable for primary tropical forests?

This article was written by Rhett A. Butler, the head administrator for news.mongabay.com. This article is republished with permission, original article here.