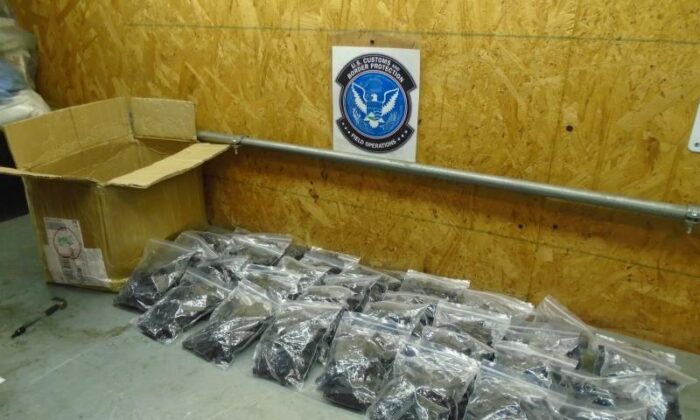 The recent seizure of 10,800 assault weapons parts from China is part of a surge in the intercepts of illicit gun parts shipments from China, according to data from U.S. Customs and Border Protection (CBP).

Customs officers have seized a total of nearly 5,300 illicit gun part shipments in fiscal year 2020, dwarfing the 78 shipments seized in 2019 and 31 shipments in 2018, according to CBP statistics obtained by The Epoch Times.

The weapons components from Shenzhen, China, account for more than half of all the Chinese weapon parts seized this fiscal year, according to the CBP. Customs officers have seized more than 20,700 weapon parts in fiscal year 2020, which ends Sept. 30.

“You’re seeing that shipments come in that have one or two items in them,” said Steven Bansbach, a public affairs officer at CBP’s Chicago field office.

Since January, CBP officers in Louisville, Kentucky, have seized a variety of small gun suppressor shipments from China at a local consignment hub. The shipments contained silencers of varying designs destined for different cities. The packages came in labeled as soft toys and fuel filters.

“The improper manifesting of contraband as a harmless or legitimate commodity is a common tactic used by some ill-intended importers to elude further examination,” Chief CBP Officer Brian Lick said in a statement. “However, CBP officers are trained and vigilant in the detection of those types of tricks and work hard to make sure these illegal firearm components stay off our communities’ streets.”

Only licensed importers, dealers, or manufacturers can import firearms into the United States. The Bureau of Alcohol, Tobacco, Firearms, and Explosives, which regulates weapons shipments, didn’t respond to a request by The Epoch Times for comment.

CBP seized the 10,800 assault weapons parts from Shenzhen on May 22 and reported the haul on June 26. The shipment manifest described the contents as “100 Steel Pin Samples.” Similar to the silencers, the shipment was seized at a consignment hub in Louisville.

While the number of intercepted shipments of gun parts from China has surged this year, the CBP has so far seized far fewer guns in fiscal year 2020 than last fiscal year. According to the CBP, customs officers seized 3,622 guns in 1,081 incidents in 2019. To date this fiscal year, the agency has seized 1,456 guns in 450 incidents.

China leads the list of foreign nations in which illicit gun shipments originated over the past three years, according to CBP statistics.