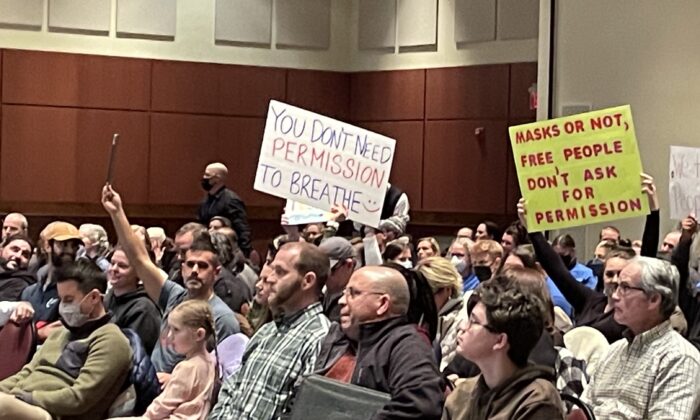 LOUDOUN COUNTY, Va.—Loudoun County Public Schools (LCPS) is reverting to segregation-era-style policies by treating masked and unmasked students differently, parents whose children chose to not wear a mask to school this week said at a Jan. 25 school board meeting.

The mask mandate has been a contentious issue between parents and the school board in the Virginia county over the past two years, with the topic consistently being mentioned during public comments at school board meetings. However, it has escalated to a new level since the state’s new Republican governor took office on Jan. 15.

On his first day in office, Gov. Glenn Youngkin signed an executive order (pdf) that removed the mask mandate in schools, leaving students’ mask-wearing to be determined by parents. The order took effect on Jan. 24. However, on Jan. 18, the Loudoun County School Board voted 8–1 to keep the district’s mask mandate in place.

Students who refused to wear a mask were sent to the school auditorium, gym, or library to social distance and do virtual learning, according to LCPS spokesperson Wayde Byard. He told Fox News on Jan. 25 that fewer than 200 students out of the total 80,000 student population went to school without wearing a mask.

At the meeting, more than 100 people registered to speak, and about 200 people attended. Before the public comment session, about 40 parents and teachers held a rally outside in the cold so that they could speak freely without the one-minute limit imposed during public comment.

Caroline Thomas, 16, and Laura Thomas, 14, told The Epoch Times that because they chose to not wear masks, they were stuck in the school auditorium on Jan. 24 and an auxiliary gym on Jan. 25. The room temperature was 85 degrees Fahrenheit on Jan. 24, and 55 degrees F on Jan. 25, they said.

“Both times [days] in a room with no windows and no access to anybody else except for the unmasked students,” Caroline said.

Caroline is a junior and Laura is a freshman at Woodgrove High School.

According to Caroline, the vice principal and administrators guarded the door so that the unmasked students couldn’t leave the room on their own. On Jan. 24, the virtual learning platform wasn’t updated, so it took a while for the students to obtain instructions and assignments.

“I just think it’s very discriminatory and segregation. We are separated from people because we choose not to wear a mask while they [other students] are wearing a mask. That’s not okay. That’s ridiculous,” Caroline said. “We’re supposed to have the same equal education, not learning separately on Chromebooks while they’re doing in-person education with the teacher.”

The unmasked students also were told that they would have to mask up to go back to classrooms if they needed to take tests, according to Erin Thomas, Caroline’s mother. Because the end of the second grading period is on Jan. 28, many students have quarter-end tests to take at about this time.

“This is punitive psychological warfare trying to force them to break, leave, or comply,” Clint Thomas, father of Caroline and Laura, told The Epoch Times.

Erin said her family plans to “hold the line.”

“This is not about getting everybody to take the mask off. This is about free choice,” she said. “All we’re trying to do is exercise our free choice in the United States of America.”

Erin said she was “really proud of our kids,” noting that fighting for freedom outweighs getting an “A” on a test.

On the morning of Jan. 26, the school didn’t allow Caroline and Laura to enter the classroom for a student-run Bible study at 8:30 a.m., before school time, the family told The Epoch Times.

Some participants at the meeting spoke in support of LCPS’s mask mandate. In their speeches, they also supported equity, diversity, and inclusion programs.

Joel Cornell, of the Northern Virginia branch of Communist Party USA, said the school board must “protect the students through the most basic safety protocols like masking and social distancing, a simple tool in the fight against the pandemic.”

Erika Ogedegbe, an LCPS parent, thanked the board for “listening to science and public health experts, which support mandatory masking in schools.”

Several speakers said that the overwhelming voice for parents’ choice of masking students at the school board meeting was “loud,” but “a very small fraction of the county” and that these parents didn’t represent the whole community.

“There will come a time to unmask, and none of us want that to be this way forever. But it’s up to the scientific and medical community, not politicians, to guide us when the time is right,” one of them said.

Teacher Disciplined for Not Wearing Mask

Karen Mineo, an art teacher at an LCPS elementary school, was put on leave without pay on Jan. 24 for not wearing a mask during class. A day later, she received a disciplinary letter from her principal.

The letter states that the principal expected her to “comply with the required mask order when in LCPS buildings,” effective immediately.

“Any violation of the expectations outlined in this Memo of Expectation may result in additional disciplinary action, up to and including termination,” the letter reads.

At the rally, Mineo said her principal was nice, but “he still canceled me because of a directive that was given to him.”

“So that’s the way it was explained to me: The choices are either you mask up or go home,” she said. “And it’s leave without pay.

“The few people I encountered at that school that day applauded what I was doing, but had no guts to do it on their own. So I said, ‘That’s it. I have to keep this fight. I have to keep it going for all those teachers who are just too scared and can’t face it.’”

Representatives for LCPS didn’t respond to a request for comment by press time.

Youngkin issued a statement regarding the issue on Jan. 21.

“I have said all along that we are going to stand up for parents,” he said. “Executive Order 2 is not about pro-masks versus anti-mask, it’s about empowering parents.”

Youngkin noted that he’s confident that the order would hold up in court.

On Jan. 24, seven school boards in Virginia filed a lawsuit against the governor in Arlington Circuit Court, seeking an immediate injunction barring enforcement of his mask-optional executive order.

More than 50 of the roughly 130 school districts in Virginia voted to keep the mask mandate, according to The Washington Post.