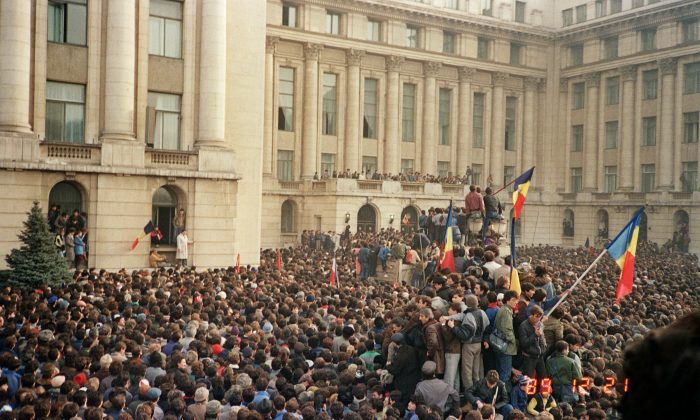 Bucharest citizens wave Romanian flags as they stage an anti-communist demonstration at the Republic Square on Dec. 21, 1989, shortly before the fall of the communist regime. (Photo credit should read AFP/Getty Images)
Viewpoints

Segregating the ‘Proletariat’ from the Communist Elites

An American politician visiting Romania in the late 1970s wondered why there were few farmhouses on the green agricultural land, unlike in rural America.

The uncomfortable-looking translator did not answer his question for fear of retribution; if she told the visitor that the farmers had been forcibly removed from their lands and moved into villages with crowded homes, or into high-rise cinder block apartments in the city, she would have been severely reprimanded.

The combined lands of farmers were turned into co-operative farms run by the local chapter of the Communist Party. The former landowners had to work the soil, produce the crops, and harvest them, but received only a small percentage of the crop, while the totalitarian government took the lion’s share.

It was social engineering devised by the Soviets to forcibly separate the majority of the population from their property, to make them dependent on the communist government for their every need: food, housing, electricity, water, medical care, transportation, education, and entertainment.

He could not understand why foreigners and the Communist Party elites could rent rooms in nice hotels while the proletariat was relegated to cheap hotels with broken furniture and terrible food.

A foreigner on vacation had to rent a separate room from his Romanian wife and pay in hard currency, often dollars. The room rates and services were vastly different.

The proletariat in the cities and the poor farmers in rural areas were segregated from their communist masters in all aspects of life.

Communist Party members, the community organizers, and the lowly block informers—who reported to the police on the comings and goings of every family living there—shopped in separate grocery and clothing stores. The informers and collaborators with the party were given more cash and food rations than everyone else.

The communists, even the low apparatchiks, had their own doctors and hospitals. There was no shortage of good doctors and medicine for those who were loyal to the Communist Party.

The proletariat had to see the one doctor assigned to their neighborhood. Sometimes thousands of patients were expected to see one overworked and underpaid doctor, who often resorted to bribes to supplement the egalitarian income determined by the state. The communists implemented unfair labor conditions and had no idea about economics, nor did they have an interest in planning a society based on equal opportunity and fairness. They just had the gift of gab and were willing to kill for their ideological rhetoric.

Rural citizens had a miserable existence and received their health care from the village nurse if they were lucky to have one. There were no stores; they had to survive on the co-op farm rations and their gardens.

The proletariat had the city pool with dirty water that often caused disease outbreaks, while the elites had their own resorts outside larger towns, with gated communities, protected by personal sentries. Often their villas had been confiscated from citizens accused of being “bourgeois.”

Once a year, if they were lucky, workers could go alone, without their spouse, to a proletariat resort where they were fed better, received mud and sulphur baths, and partook in other relaxing activities.

The ‘Equality’ of Communist Elites

The communist rulers often partied on weekends in restaurants where the tab was paid by the party, or the bribes it received. The proletariat never saw the inside of a restaurant because they simply could not afford it on a salary of $70 per month.

The communists were above the law no matter how heinous their crimes may have been, while the proletarians were punished for crimes both real and imagined.

The proletariat had to ride the rusty, run-down trains and rickety buses spewing choking fumes, while the elites had their own cars, some with a chauffeur, depending on their party rank.

Volunteer work was involuntary several times a year, including planting and harvesting crops in the fall, but the children of communists were exempt.

Following college graduation, the communist students received the best jobs and assignments, while the rest were sent to far-away villages with no public transportation, water, electricity, and doctors—an existence that time has forgotten.

After front row tickets were distributed to communists, proletarians were offered gallery tickets they could not afford—they had to pay bills, rent, food, and electricity. Unlike the false rhetoric, nothing was free. It didn’t matter, anyway, because many forms of entertainment were no longer important to the workers who were sick of hearing blatant lies. Plays and shows always glorified the dear leader and the Communist Party that “selflessly” protected the proletariat from the “evil capitalists.”

Those who left communism and moved to the West but continued to support and promote communism through their votes, determined to change the West into a communist society, were usually Communist Party members and their progeny who had lived a privileged life, segregated from the proletariat’s hard life.

Only a regime change through violent means—a military coup during the December 1989 Revolution—ended the class segregation between the proletariat and the communist elites in Romania.