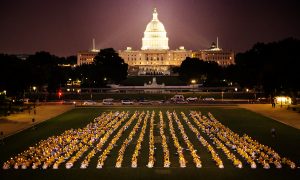 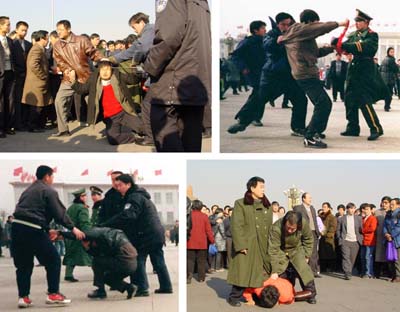 Seeking to Stop a Persecution at Its Beginning

On July 19, 1999, I was riding on a long-distance bus bound from Hebei Province to Beijing, when the bus was stopped by armed police halfway to our destination. I could overhear what the police told the driver: they wanted to intercept Falun Gong practitioners traveling to Beijing to appeal.

After the bus arrived at the Military Museum Station, I got off and walked to the China Central Television (CCTV) building. The atmosphere there was very tense, with many officials, police, and plainclothes officers present. It had been rumored that CCTV wanted to broadcast a film that slandered Mr. Li Hongzhi, the founder of the spiritual discipline Falun Gong.

The film had been made in Wuhan, the capital of Hebei, and thousands of Falun Gong practitioners from Wuhan had already petitioned at the CCTV building seeking to stop the rumored broadcast.

I had graduated from Tsinghua University—often known as “China’s M.I.T.”—with a bachelor’s degree and was waiting to begin a PhD program there in 1999. On July 20 I went to school and logged onto the newly launched Falun Gong website called Minghui.

I was shocked: all practitioners in charge of the Falun Gong volunteer teaching centers and all Beijing Falun Gong Research Society members had been kidnapped at midnight.

Many Falun Gong practitioners in Changchun, Shenyang, and other places who had petitioned their respective provincial governments to safeguard the environment for practicing Falun Gong had been beaten and arrested by police.

When I ate in the cafeteria, I met several fellow Falun Gong practitioners, and we decided that the next day we would petition the State Bureau of Letters and Calls—the office that is supposed to be open to anyone in China to appeal for the redress of any state wrongdoing.

July 21 was a very hot day. The streets around the State Bureau of Letters and Calls were packed with plainclothes officers who randomly asked for practitioners’ IDs. Nonetheless, many fellow practitioners from Beijing were there, uncowed.

I watched two fellow practitioners, who looked like they were from another province, being pushed into a police car. One practitioner asked, “Why are you arresting me?” A policeman replied menacingly, “You’ll find out soon enough.”

As more practitioners gathered, and the number of police also increased, big, empty buses arrived one after another, and the police began to seize and drag practitioners onto the buses.

Practitioners resisted, standing firmly, hand in hand, arm in arm. Then, suddenly, a dozen police rushed towards a middle-aged, male practitioner, throwing him down and violently beating him. After passing out, he was loaded on a bus.

Practitioners chanted, “Protect the constitution, [police] are not allowed to hit people.”

A policeman was not far from me, and I said to him, “You call yourselves the people’s army, why do you beat people?” He was speechless.

When the police were violently pulling and dragging us, the muscles in my chest were injured.

Later on, practitioners were forced into the large buses and taken to Shijingshan Stadium at the outskirts of Beijing. They stuffed over one hundred practitioners on one bus, but there was only one armed policeman, besides the driver, to guard them.

With their actions, the police showed that they knew they were arresting good, innocent citizens. That single guard on the bus was proof that Falun Gong practitioners are good people who uphold the principles of truthfulness, compassion, and tolerance.

After arriving at Shijingshan Stadium, we were pushed to the ground and made to sit under the baking sun, while police insulted and mocked practitioners. One male practitioner was constantly knocked down by police, but again and again he would stand up. Police also poured water on him.

Later, they took us to Fengtai Stadium, where even more practitioners were detained. I saw riot police who wore helmets, holding shields and batons, beating practitioners. A Tsinghua University student was beaten until his T-shirt turned into strips of cloth. Another practitioner’s belt was broken in half from the beating.

The next day, we again went to appeal. The situation was similar to the previous day. Many practitioners were beaten and arrested.

From that point on, the media began attacking Falun Gong incessantly. All television channels, newspapers, radio stations, and internet sites were used to slander Falun Gong and Mr. Li Hongzhi.

The weather in Beijing was extremely hot those days. Friends of mine at the university said they felt as though they were living in hell.

The media’s overwhelming campaign of slander against Falun Gong pained me immensely. All I wanted was to appeal and seek justice for Falun Gong.

Nearly everyone at Tsinghua University who practiced Falun Gong, including professors and students, was persecuted. The majority were sentenced to prison or labor camps, with the longest sentence being 13 years.

Tsinghua alumnus Yuan Jiang died from torture and mistreatment. Liu Zhimei, a young female student, was driven insane and is now disabled. Zhang Lianjun, another alumnus, is paralyzed and suffered brain damage. These are just a few examples.

I was arrested several times and sentenced to five years in prison. I spent two years in the Second Detention Center of Zhuhai City and three years in Sihui Prison in Guangdong Province. I was forced to do slave labor.

Mistreatment I suffered included force-feeding, beatings, being shocked with electric batons, and sleep deprivation. In addition I was tormented with Cultural Revolution-style “criticism sessions” and brainwashing.

But the patient efforts of practitioners are changing things inside China. More and more Chinese citizens are coming to understand the truth and support Falun Gong. They express their disapproval of the authorities by withdrawing from the Chinese Communist Party. Some have even begun to practice Falun Gong.

During these 14 years, the head of the Chinese Communist Party has changed twice, but the persecution continues.

Falun Gong teaches people to live according to the principles of truthfulness, compassion, and tolerance. Practitioners all strive to raise their moral standards.

The persecution is not merely directed against Falun Gong. It is an assault on the very idea of living a moral life and has brought Chinese society to the brink of moral collapse. The persecution has been a calamity for the entire Chinese nation.

Since the crime of forced, live organ harvesting from Falun Gong practitioners has been exposed, how can anyone with a conscience stand with the Chinese Communist regime? This persecution must end.

Huang Kui emigrated to the United States in 2008. An engineer, he lives and works in Peoria, Illinois.