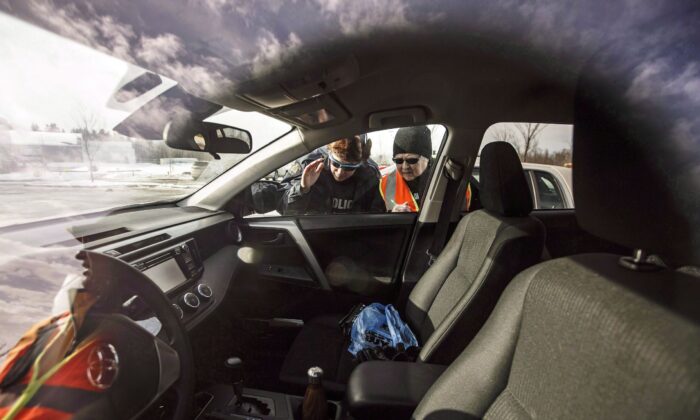 An RCMP officer and a Citizens on Patrol volunteer check a car for valuables to warn the owner about the risk of leaving valuables in a vehicle, in Ardrossan, Alta., on March 6, 2018. (The Canadian Press/Jason Franson)
Canada

Manitoba is the latest Prairie province to consider legislative changes to deal with rural crime. Advocates say the federal government must also change gun laws to clarify the right to self-defence.

Pam Downie farms west of Cut Knife, Saskatchewan, with her husband, Scott. She tells The Epoch Times that there’s been several incidents of crime on her farm in recent days, including the theft of three vehicles owned by a recently deceased tenant.

“All three vehicles were recovered. One was littered with needles and drug paraphernalia. Just today, a neighbour found his swather [grain harvesting machine] suddenly devoid of fuel. And the RCMP are currently talking to a person who has been swerving, driving all over our roads since this morning,” Downie says.

In addition, police recently recovered an abandoned truck on the Downies’ land that may also have been stolen. Another truck was burned north of their yard. When asked if policing is adequate, Downie is clear.

“Absolutely not. They do the best they can, but I think there’s only four officers in the Cut Knife detachment, and that means that they are usually responding to calls alone and a single officer is covering the area from just west of Sweetgrass [First Nation] to the Alberta border.”

That distance is 90 kilometres east to west.

“They do a good job, but when a single group of thieves can rob an area blind in a few evenings, they are severely understaffed,” Downie says, adding that the internet has helped.

“The best defence we have right now is [Facebook] Messenger. A neighbour started the group so we could have community parties, etc., but now it has turned into a virtual Neighbourhood Watch. We report crimes, weird tracks, and suspicious vehicles. … So many worries for the safety of folks around here, but it’s primarily property crime.”

The proposals mirror Alberta’s Bill 27, which protects property owners from civil liability or lawsuits from trespassers injured by a person acting in defence of his or her property. The bill came about after Edouard Maurice fired warning shots at alleged burglars outside his home near Okotoks in 2017. One tried to sue Maurice for $100,000, plus compensation for lost wages after he was hit by a ricochet bullet.

Maurice was charged with aggravated assault, pointing a firearm, and careless use of a firearm. The charges and lawsuit were later dropped.

In 2016, Colten Boushie had a loaded .22-calibre rifle when he drove an SUV to Gerald Stanley’s farm near Biggar, Saskatchewan, roughly 150 km southeast of Downie’s farm. Boushie and his friends, who had been drinking, attempted to steal a truck at the previous farm they went to, then tried to start an all-terrain vehicle at the Stanley farm.

Stanley fired twice with a pistol before fatally wounding Boushie. He claimed the third shot was accidental and his finger was not on the trigger.

Stanley was acquitted of murder and of manslaughter through careless use of a firearm. He was later fined $3,000 for unsafe storage of a firearm and banned from owning firearms for 10 years.

Blair Hagen, executive vice-president of communications at the National Firearms Association (NFA), says NFA members are “very supportive of the defensive use of firearms.” However, federal laws “prevent successful self-defence with firearms: a lot of the storage issues, transportation issues, a number of different things.”

In May 2019, a parliamentary committee released a “Study on Crime in Rural Areas in Canada.” The report acknowledged that witnesses felt helpless and had a desire “to take matters into their own hands.” Police response times were long, it noted, “hours or even days in some cases.”

“However, the Committee discourages this kind of intervention by citizens,” read the report.

“Canadians can reasonably provide for their own self-defence. We’re rational people, we’re not vigilantes, we’re not hotheads, and I think people know the difference between the legitimate use of a firearm for self-defence from something that is not.”

In Olds, Alberta, garage owner Gord Bueckert launched a local chapter of Citizens on Patrol in 2017. Volunteers work in pairs to watch for strange vehicles or suspicious activity.

“Any time you’re doing something like this, there is a risk because of people who have guns,” he tells The Epoch Times. “We try to be cautious and that’s why we try to stay in our vehicles unless it’s a first aid emergency.”

Bueckert says the volunteers also deter crime by “going through parking lots and writing notes [to put on vehicles] … saying, ‘Your keys are in the car. Bad idea,’ or ‘Good job! Everything’s tucked away, nobody can see it,’ because if people don’t see those things, they won’t pick your vehicle first to break into.”