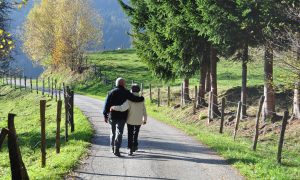 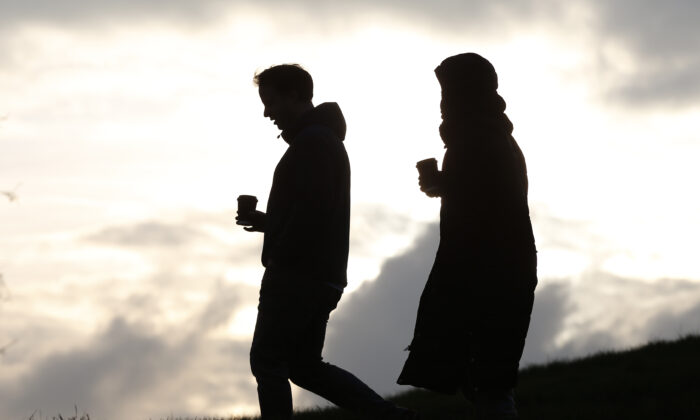 People walk with drinks as they do their daily exercise at Primrose Hill in London on Jan. 15, 2021. (Hollie Adams/Getty Images)
UK

Seeking Exercise During Lockdown, Walkers Are Damaging Crops in England

With exercise restricted in England by lockdown laws, some walkers are inadvertently damaging crops as they eschew public footpaths churned into mud by unprecedented footfall, according to a rural business group.

The solution, according to the Country Land and Business Association (CLA), is simple: put on a pair of wellies.

“It is perfectly natural, in times such as these, for people to want to enjoy the countryside,” Mark Bridgeman, president of the CLA, said in a statement. “They are genuinely welcome and we encourage people to enjoy the thousands of miles of footpaths available to them. But we need to work together to ensure the public can have an enjoyable time while also protecting farmland, animals and wildlife.”

The CLA, which represents 30,000 rural businesses across England and Wales, said that attacks by dogs on livestock have also risen.

“Unfortunately, that means many are circumnavigating the mud and walking over planted crops, damaging food crops and impacting farmers’ businesses,” Bridgeman said. “Our advice is to use a decent pair of wellies—or walking boots—and stick to the route of the footpath.”

Much of the 150,000 miles of public footpaths in Great Britain run through farms or private property, and are maintained by the landowners.

A tenant farmer in Buckinghamshire told the BBC that he had lost wheat worth about £1,000 ($1,367), but said that the damage was “entirely accidental”.

Oxfordshire farm manager Simon Beddows told the BBC that the combination of heavy footfall and wet weather was causing “lasting damage across the whole country”.

Gyms and leisure centres are shut under lockdown laws, which also mandate that people exercise locally. The only opportunity for socializing is through joining one other person, outside, for exercise.

Dog ownership has also risen during the pandemic, which has also pushed up the number of novice owners who have yet to manage their pet’s behaviour.

The CLA said that there had been several reports of sheep being killed by dogs that had been let off their leads on open farmland.

But it isn’t just sheep, cows, dogs, humans, and farmers that have been pushed close together by the lockdown.

In London’s Royal Parks, keepers are concerned about rising attacks on deer.

Earlier this week a dog walker was fined £602 ($815) over a fatal attack by his Red Setter on a deer in Richmond Park—where they are protected by law.

According to the police, the doe was hit by a car as it tried to flee the dog, breaking its leg. It was later put down by a gamekeeper due to its injuries.

“Sadly, this was the fourth deer that died over the last year as a result of dog chases in Bushy and Richmond Parks,” Simon Richards, park manager for Richmond Park said. “We’ve had 58 incidents of dogs chasing deer reported to us since March 2020, and it’s completely unacceptable.”