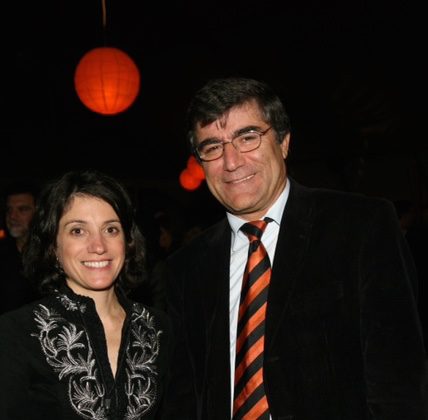 Carla Garapedian with the late Hrant Dink, a Turkish-Armenian newspaper editor who was assassinated in Turkey two months after “Screamers” was released. He was interviewed in the film. (Courtesy of Carla Garapedian)
News

Seeking Amends and Recognition: 100 Years After the Armenian Genocide

“The nearest successful example [of collective denial] in the modern era is the 80 years of official denial by successive Turkish governments of the 1915-17 genocide against the Armenians in which 1.5 million people lost their lives. This denial has been sustained by deliberate propaganda, lying and cover-ups, forging documents, suppression of archives, and bribing scholars.”

“Show me who makes money off war and I will show you how to stop wars.”

Reparations (noun): The making of amends for a wrong one has done by paying money to or otherwise helping those who have been wronged. The courts required the convicted offender to make financial reparations to the victim’s family. Synonyms: amends, restitution, redress, compensation, recompense, repayment, atonement.

“The brutal treatment of the deportees, most of whom were made to walk to their destinations, made it apparent that the deportations were mainly intended as death marches. Moreover, the policy of deportation surgically removed the Armenians from the rest of society and disposed of great masses of people with little or no destruction of property.”

Why has Turkey refused to officially recognize this governmental purging of an entire people? One must allow that such a confession would come with the responsibility of reparation. Under laws that allowed the confiscation of Armenian property, there were mass executions into open graves and death marches of men, women, and children across the Syrian desert into concentration camps, with many dying along the way of exhaustion, exposure, and disease.

Much or all of it was documented, photographed, stated in letters by leaders of state. What is not shown or not stated is a family house, in disarray, some telltale evidence of men, women, and children, a family, its rightful owners being forcibly torn from their homes. A store, or maybe rows of stores, their inventory still stacked neatly on the shelves, lace goods, work clothes, canned food, a life’s work, the ownership taken over by the state.

Your mind’s eye dynamically begs the question, how can I think about that, just property, when whole families were shot, beaten, and “relocated” away from their homes, stores, and churches to die on desert marches to desert death camps. I consider this confiscation of property a dynamic issue, because this may be one of the most soul-wrenching reasons for this historical genocide, that these lives were taken so their property could be taken, under government policy.

Of course, you must hate a whole people before activating that kind of policy. As did Hitler, before he started his policy of genocide against the Jews, the government policy called “living space” (Lebensraum) or “more land in the east.”

Historically, the German people paid reparations for the atrocities their government committed, as did other nations. If, indeed, confession heals the soul, the question is how much a nation wants a healthy national soul. It is not about taking away a people’s property rights. It’s about taking away a people’s rights to exist. And an overview of Turkey’s stance of refusing to recognize this documented genocide shows they feel they do not have to recognize the Armenians’ right to reparations. To deny a massive human crime to keep plundered land is a worldly crime. To have committed genocide for the victims’ land is a spiritual crime on the human conscience.

“Because of the continuing character of the crime of genocide in factual and legal terms, the remedy of restitution has not been foreclosed by the passage of time. Thus the survivors of the genocide against the Armenians, both individually and collectively, have standing to advance a claim for restitution. This has been also the case with the Jewish survivors of the Holocaust, who have successfully claimed restitution against many States where their property had been confiscated. Whenever possible restitutio in integrum (complete restitution, restoration to the previous condition) should be granted, so as to re-establish the situation that existed before the violation occurred. But where restitutio in integrum is not possible, compensation may be substituted as a remedy.”

“Thank you for the recognition and condemnation. 2015 bears particular significance for Armenians all over the world. On April 24 Armenians around the globe will commemorate the most tragic page of the nation’s history—the centennial of the Armenian Genocide. It was an unprecedented crime aimed at eliminating the nation and depriving it of its homeland: a crime that continues to be an unhealed scar for each Armenian. The 1915 Genocide was a crime against civilization and humanity, and its inadequate condemnation paved the way for similar crimes of mass murder in the future.”

—President Serzh Sargsyan, statement at the 69th Session of the UN General Assembly

An Interview with Carla Garapedian

Carla Garapedian is an award-winning documentary director based in Britain, who has covered human rights issues in North Korea, Chechnya, Afghanistan, and Iran. She was also an anchor for BBC World news. Her film “Screamers” was released in movie theaters in 2006.

SBB: Carla, you’re involved in various film projects, and we want to talk about that. I understand you have a history about the genocide in your own family. Would you talk about that?

CG: I am the grandchild of genocide survivors on both sides of my family. My mother’s parents were survivors of the Hamidian massacres in the late 1890s in Ottoman Turkey. Sultan Abdul Hamid, the so-called “Red Sultan,” killed an estimated 200,000 Armenians in this period. That’s on my mother’s side. My father’s parents were survivors of the 1915–1923 genocide, by the Young Turks. They came from Van, in the eastern province of Turkey, and emigrated to America in 1922. My father’s mother talked about the genocide in hushed tones, even after she escaped to America. It is her memories that are most embedded in me.

SBB: You made a film called “Screamers.” How does that relate to the genocide?

CG: “Screamers” is a term coined by Arthur Koestler during the second World War. He cited people who experienced the Nazi atrocities, and tried to raise a red flag to warn the international community. People might listen for a moment, but then, he argued, they inevitably turned away. Samantha Power took this notion a step further, asking why we don’t listen to the Screamers.

Power, who is currently the US Ambassador to the UN, wrote a Pulitzer-prize winning book,

“A Problem from Hell: America and the Age of Genocide.” She starts with a “Crime with No Name.” That crime was the Armenian Genocide. She says the Armenian Genocide is the template for the 20th century, a model for how we obfuscate the issues and escape responsibility. We say “Never Again” but we don’t mean it. We enable genocide perpetrators, she says, through our non-intervention.

I followed her thesis, looking at the recurring problem of genocide in the 20th century, starting with the Armenian genocide, then the Holocaust, Bosnia and Rwanda, then going forward into the 21st century, with Darfur.

SBB: What is the name of the foundation you’re working with Spielberg? And who are some of the other part in it? And what are the goals of that foundation?

CG: I am working with the Armenian Film Foundation. We have digitized a rare collection of Armenian genocide survivor and eyewitness testimonies, filmed by the late J. Michael Hagopian on 16mm film.

Over 40 years, he travelled the world to record survivors and eyewitnesses, hoping for the day there would be an international tribunal to prosecute the Turks. A digital copy of that collection will be launched April 24, in the Shoah Foundation’s Visual History Archive at USC. Spielberg founded the Shoah Foundation after making the movie “Schindler’s List.”

He believed it was essential to record, preserve and disseminate Holocaust survivors’ testimonies. Now his archive has expanded to include other testimonies from other genocides—like Rwanda, Cambodia, and the Armenian Genocide.

SBB: As an Armenian woman, how are you interpreting possible future work to bring forth any possible awareness to the public, or possible solution?

CG: I guess you could call me a humanitarian. It is impossible to experience genocide in one’s family and not be aware of the consequences it imposes, not just on whole nations and communities, but on civilization generally. Denial is very insidious. It is dangerous in so many ways, because it involves skewing the historical narrative in such a way, it compromises our own historical record, not just the Turks.

America saved many Armenians during the genocide. Britain promised to punish Turkey for its “crimes of humanity.” So why are these countries backtracking on their own historical record? The only way to address this is to speak the truth. Historical truth should never be denied in a democracy.

As for solutions, I believe popular culture is an important way to educate the general public about genocide. Most people feel this is a huge problem we can’t do anything about. But that’s how many people felt about slavery. Look how that changed. Genocide is not something that happens to “other people.” It’s not an inevitable by-product of war, or some kind of natural disaster, like a hurricane. It is the result of a belief system.

We have to see the Armenian genocide, the Holocaust, Cambodia, Bosnia, Rwanda, and Darfur as part of that bigger problem, so that we can prevent future genocides. In this way, popular culture (such as films and music) can make a difference. It allows the viewer or audience to relate to the experience of the genocide victim. Through testimony, film, music, photography—we can humanize the problem, rather than making it some kind of abstract phenomenon.