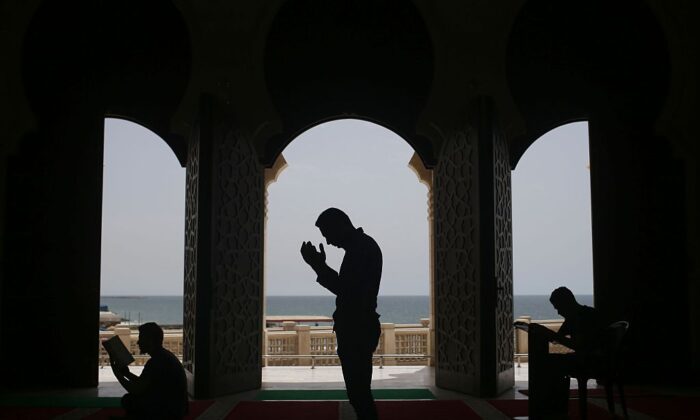 Palestinians pray at the al-Khaldi mosque on the third day of the Muslim holy month of Ramadan in Gaza City, on June 8, 2016. (Mohammed Abed/AFP via Getty Images)
Viewpoints

Seeing Islam in a New Light?

To say that Christians and Muslims have enjoyed a love-hate relationship over the centuries would, sadly, be a gross misstatement. If it were true, it would be a reasonably wholesome thing, for at least it would imply openness to mutual understanding and acceptance, a willingness to try and admire each other in theory, even if in practice spoiled by occasional eruptions of suspicion and fear.

The regrettable truth, however, is that strong dislike and even loathing has more often than not characterised the attitude of Christians towards Islam, an attitude that has been hotly reciprocated by Muslims. To put it simply, we are old enemies.

Each side has fought and lost many battles, and we all have bitter memories. Nevertheless, the Middle East was not only the nursery but also once the home ground of Christianity.

All that changed with the rise of Islam: Christians lost Palestine and all the contiguous territories. Their attempts to recover lost ground in the Crusades have been criticized not only by Muslims but by secular historians in a post-Christian age who have no love for what they see as the “racist” tradition of Western civilisation and conveniently forget the sack of Rome and other aggressive acts of the ninth century which terrified the West.

On the other hand, the Muslims eventually lost their gains in Spain and Sicily and abandoned their goal of a strong foothold in western Europe, a dream they nurtured till relatively modern times.

It is startling to remind ourselves that Vienna was besieged in 1683 and that the Ottoman Empire remained a significant world power until World War I.

But Islam is not a spent force in Europe. Modern Europeans of a conservative bent and that includes many in the minority that still adheres to Christianity, see Muslim immigration as a new and more subtle invasion, a threat to their inherited cultures. As a result, the anti-immigrant voice is growing louder, a circumstance that, in turn, further fuels Muslim resentment.

It’s not a promising picture, but it’s not without a certain irony either. Christians complain that Islam is focused on world conversion and that Muslims will never be satisfied until the world has turned to Islam, either voluntarily or by compulsion. Muslims might be pleasant enough when non-Muslims are in the majority, they think, but once Islam gets the upper hand, the gloves will come off.

Truly Islam has consistently shown it is very strong on proselytising. But as a criticism, it’s a bit rich coming from people whose Leader’s final words to them before His ascension were: “Go ye and teach all nations, baptising them in the name of the Father and of the Son and of the Holy Ghost.” The reality is that Christianity and Islam are almost inevitably at loggerheads because both are driven by immense ambitions to teach and convert.

How realistic is it than to hope for some rapprochement between the two faiths? William of Tripoli was a Dominican friar whose life span closely paralleled St Thomas Aquinas’s (William died in 1273, Thomas just a year later in 1274).

William came from the County of Tripoli, which was the last of the Crusader states to fall to the Arab conquerors, though he was no doubt of Italian or French descent. He must have been fluent in Arabic, and he worked all his life as a missionary. He was no mere backroom boy, though, for he enjoyed the favour of popes and was at one stage appointed a papal nuncio.

The remarkable thing about William is that he wrote two books that were highly sympathetic to Islam at a time and in a place where you would expect such a thing to be unthinkable. Without rancour, he narrates the story of Mohammed’s life and the subsequent rapid rise of Islam; he describes the Koran and relates it to the Christian and Jewish scriptures and even—rather cheekily—claims that the two Christian doctrines of the Trinity and the Incarnation are implicit in the Koran!

Both William’s books were clearly written as handbooks for Christian missionaries, in the belief that there was common ground to be found and that both communities worshipped the same God.

By contrast, there were Christians in William’s time (and still are today) who believed that the Muslim religion was literally diabolical. St Thomas Aquinas, in his earlier work, is hostile to Islam, but his later writing shows a softening of attitude. Was this due to the influence of William? In my view, that is very likely.

No doubt, it was also in part due to the growing interest in the work of Arab thinkers such as Averroes, who first made Aristotle’s thought available in the West centuries before his Greek originals could be accessed. But William’s sympathetic view stands out as exceptional.

However, it must not be forgotten that William was a Christian through and through. He believed firmly that the Christian revelation is unique and final.

There has always been a thread in Christianity that believes that God has spoken through good men and women outside the Church of the New Testament, particularly through the Hebrew prophets, but also in the work of noble pagans like Plato and Aristotle, Cicero, and Virgil.

St Augustine recommended “spoiling the Egyptians,” by which he meant taking from the pagan world all that was good while rejecting the unwholesome. Cassiodorus insisted that many of the fathers of the Church, thoroughly tutored in pagan learning, flourished in the faith and came to true wisdom in spite of it, or even perhaps because of it.

It is a remarkable thing that the keys to the Church of the Holy Sepulchre in Jerusalem are held in trust by a Muslim, Adeeb Joudeh al-Husseini, representative of a family that has honourably maintained the holy places there for centuries.

If you have seen Muslims at prayer or heard of their distress at the dangerous defection of some of their radicalised youth, you will recognise good people who love God and try to serve him.

God alone knows how relations will develop in the future between the strong-willed followers of these two major “religions of the book,” but a good start is to emphasise the things we have in common, such as the greatness of God and the centrality of the family.