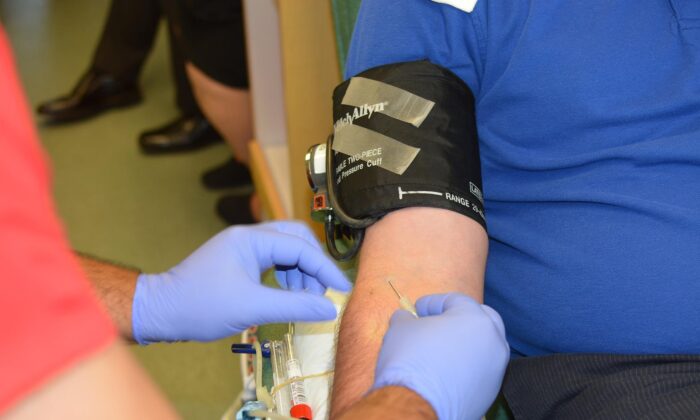 When I showed my wife, who prefers gardening to politics, a photograph of a high official of the U.S. government who had changed gender (but not sex), I’m afraid that she refused to believe that it was veridical. The ability to change or forge images is now so great that it makes Stalin’s removal from past photographs of those, such as Trotsky or Yagoda, who had become nonpersons, look amateurish and bumbling. Seeing is now disbelieving, and my wife disbelieved.

It’s the same with stories in newspapers. Reality, or some of it, has become so outlandish that, when reported, one thinks, “That can’t be true!” But, as I’m proud to have pointed out some years ago, satire is now prophecy. Think of something too ridiculous to be entertained, and it will become official policy within five years.

Therefore, when I read a story in a newspaper that a 66-year-old man in Scotland hadn’t been allowed to donate blood because he refused to answer the question as to whether he was pregnant, I thought simultaneously, “This can’t be true!” and “This must be true!”

The man was a keen blood donor who had given blood often in the past. It’s difficult to think of a more disinterested and public-spirited act than the donation of one’s blood in return for nothing (except a cup of tea and a biscuit). But it seems that the bureaucrats who run the blood transfusion service in Scotland have been inculcated with fashionable political absurdity as effectively as some recipients of blood were inoculated with the Hepatitis C vaccine before donated blood was routinely tested for it. They would now rather that there was a shortage of blood to save lives than that donors should refuse to answer their fatuous question. The purpose of the blood transfusion service has thus been changed from that of providing life-saving blood to people who need it to engineering the human soul.

Alas, one can hear only too clearly in one’s mind’s ear the supposed justification for the question asked. It’s a patriarchal prejudice that only women of a certain age range can be pregnant and give birth. Haven’t women past middle age occasionally given birth, albeit with a good deal of medical assistance? And can’t people change sex at will? Why, then, assume that a 66-year-old man can’t be pregnant? The assumption is sheer prejudice, akin to racial prejudice. And since it’s inadvisable to take blood from a pregnant person (of any gender, past, present, or to come), the question must be asked. Didn’t Hippocrates say a long time ago, “First do no harm”? Besides, there’s no more important or nobler task in today’s world than the breaking down of stereotypes.

This kind of rationalization has cut a swathe through bureaucracies everywhere and, as far as I know, has met with almost no opposition. It isn’t only in the public sector that this is so, but in the private also, at least in those large companies that are but bureaucracies with bottom lines. For bureaucrats, procedure is holy, a rite that must be followed come what may, however absurd it may appear to outsiders; a bureaucrat’s superior is a god who must be propitiated.

But no man likes to think that he’s acting merely because he fears for his job and is too cowardly to resist an idiotic demand. Therefore, he’s only too glad to be able to invest that demand with a higher purpose, in this case overcoming the prejudice that only women between certain ages can be pregnant. The bureaucrat who asks the question out of obedience and fear for his position comes to believe that he’s engaged in important work for social reform. There’s no one as shameless as a bureaucrat following orders who has persuaded himself that those orders are for the good of humanity.

Naturally, he must suppress in himself the inclination and even the ability to laugh. He must have no sense of the absurd. Maybe five years ago he might have smiled at the absurdity of the idea of asking a 66-year-old man whether he was pregnant, but he wiped the smile from his face as soon as asking the question was demanded of him, and he started to ask it in earnest (through a form to be filled, of course). An absurdity can become an essential matter of inquiry within a matter of days, even though no one will ever analyze the answers to find out if 66-year-old pregnant men have been lying about their condition in order to donate blood.

While no one likes to admit to himself that he’s performing worthless tasks merely so that he may continue to collect his salary and eventually his pension, in a situation in which the task is as fatuous as asking a 66-year-old man whether he’s pregnant, a subliminal awareness of its absurdity, at least, must defeat the best attempts at denial. The person of whom such a task is demanded therefore lives in bad faith, at one and the same time demanding that a task be taken seriously and knowing that it’s nothing short of ludicrous.

Such a man, of course, is emasculated; at heart, he despises himself, for he knows that he’s useless or worse than useless (which is why he’s so often touchy and defensive). And that’s also why my detestation of idiotic bureaucracy is tempered by personal pity for the bureaucrat whose work it is. I’ve had at least two great blessings in my life: I’ve never had to commute, and I’ve never had work that appeared to me intrinsically worthless.

That such patent absurdity as I’ve described could actually become inscribed in an important institution, one that’s supposedly dedicated to saving human life, an absurdity that probably met with about as much opposition as a piece of tissue paper offers to a monsoon, is an indication of how thoroughly not only our institutions but also our characters have been rotted.