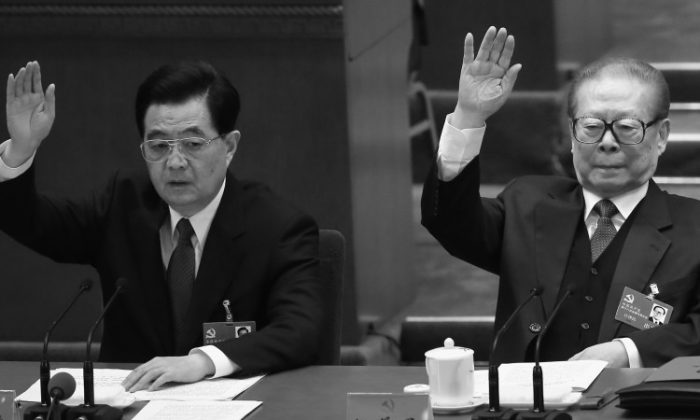 The much-anticipated once-in-a-decade changeover in the leadership of the Chinese Communist Party (CCP) has taken place, and for two weeks now, we have had a steady stream of analysis of what it all means. Much of that analysis is based on misunderstandings and false hopes.

Before the 18th Party Congress, there was a rumor that then-Party head Hu Jintao would keep for two more years his position as chair of the Central Military Commission (CMC)—the head of the People Republic of China’s armed forces. Hu was said to be entitled to do so in accordance with the Party’s unwritten rules.

In fact, there is no such unwritten rule. Mao Zedong died with all his titles. Deng Xiaoping, even though he was the real boss, had never held the titles of general secretary of the Party or chairman of the state.

Jiang Zemin was the first Party leader who, after holding all three titles, heading up the Party, the state, and the military, extended his time as chairman of the CMC after he had retired from the other two positions.

Deng Xiaoping and Jiang Zemin each had their reasons for keeping their positions in the CMC when they were otherwise retired.

In history of the CCP, there are two sentences that describe the relationship between the Party and the military: “The Party commands the gun,” and “political power grows from the barrel of a gun.” Which aphorism is authoritative depends on who is in charge.

Deng Xiaoping initiated economic reform, which was a totally new experience for the CCP. There were many potential roadblocks. He had to make sure that his reform would overcome the obstacles. That’s why he stayed on as chair of the CMC.

Holding onto the chairmanship of the CMC was the keystone to a new Party structure Jiang put in place to protect himself and his faction.

Jiang expanded the membership of the Politburo Standing Committee—the small body that runs the CCP—by two seats. He added the two persons most needed for continuing the persecution of Falun Gong: Li Changchun, who was in charge of propaganda, and Zhou Yongkang, who was in charge of the Political and Legal Affairs Committee, the Party organ that controls the security forces and the whole legal system.

Jiang used his dictatorial power to end that power. Upon his retirement, he ordered that everyone in the Standing Committee, including Hu Jintao, had only one vote but no veto power. With this arrangement in place, Zhou Yongkang could carry on the persecution of Falun Gong by himself, while the Jiang faction members, who formed the majority of the Standing Committee, could keep unchanged the policy of persecuting Falun Gong.

Both Deng and Jiang used the tactic of “political power grows from the barrel of a gun.” They succeeded in ensuring the continuation of their policies. However, both created chaos in the Party: They broke the chain of command and created a second power center at the top of the leadership.

The direct consequence of Deng’s second power center was the Tiananmen Square Massacre in 1989. The Party officials knew that Deng Xiaoping and the titular head of the Party, Zhao Ziyang, had different opinions, but they didn’t know whom to follow.

The result of Jiang’s second power center was the conspiracy by former Chongqing Party head Bo Xilai and Zhou Yongkang to seize power from Xi Jinping after the 18th Party Congress.

Just as Jiang had sought through changing the power structure to preserve himself and his faction from accountability, so Bo Xilai and Zhou Yongkang sought, in turn, to upend the Party’s power structure for the same reason.

Their plot to seize power was the real scandal that has set the Party against itself and ended up bringing down Bo Xilai. It was not acts of corruption, which are common for those of Bo’s rank, nor the murder of Neil Heywood, which Hu Jintao could easily have covered up had he wished to do so.

When Hu Jintao’s time to retire came up, he had no new policy or structural change whose implementation he needed to oversee, and so there was no need for him to stay on as head of the CMC.

Hu had been in power for eight years following Jiang Zemin’s full retirement. He had enough time to do something if he wanted. If he couldn’t or wouldn’t do anything in the past eight years, why bother to stay two more years for nothing?

Some people have said that Hu Jintao did one thing right: He retired fully after his term was up. It depends how you look at it. Hu’s retirement was part of his effort to reduce the chaos and strengthen the Party’s leadership after this past year’s political turmoil. Trying to save a Party that refuses to change and is not worth saving is hardly the “right thing” to do.

Some people have been disappointed that two individuals identified with reform did not make it—Wang Yang, the head of Guangdong Province, and Li Yuanchao, head of the Party’s Organization Department.

Both Wang and Li are considered members of the Youth League faction. This is a wrong assumption.

The princelings don’t have a faction. They have totally different interests and political views.

Actually, since Mao Zedong fully took power in the 1940s, the CCP has had no factions, with only one exception.

Mao and Deng Xiaoping didn’t have their own factions. Lin Biao, who was Mao’s appointed successor, died on a plane crash when trying to flee to the Soviet Union in 1971. None of Mao’s generals had ever considered himself part of a faction against Mao.

The only exception to the general rule has been the Jiang faction.

When Jiang was in power, those loyal to him couldn’t be called a faction. However, Jiang’s new arrangement of the structure of the Standing Committee and the extension of his manipulating power behind the curtain did create a faction inside the top leadership.

This faction had a leader, members, and common interests and tactics, which were different from, if not opposed to, the leadership of Hu Jintao and Premier Wen Jiabao. The formation and interests of the faction were based on the persecution of Falun Gong. Other than that, the leaders who can climb to the top have more similarities than differences.

If someone really wants to put Wang Yang into a category, he probably has some ideas that are similar to those of Wen Jiabao. The question is, if Wen Jiabao failed to enact reform in his 10-year term, how can we expect Wang Yang to succeed?

Besides, who is or who is not a reformer in the top leadership, in the last generation of leaders, this generation, or the next generation? Everyone’s power and wealth has come from the economic reforms started 33 years ago by Deng Xiaoping. As for political reform, has anybody ever seen it in China?

Successors are picked, not based on who is the best for the job but who is the least likely to make a change. Human rights violations, the willingness to cover up disasters—whether natural or man-made—and the lack of any obvious distinguished governing record are the basic requirements for the new leadership.

Every time an important moment comes, the CCP leadership seems to take a wrong turn: the Tiananmen Massacre, the persecution of Falun Gong, the selection of the next generation of leadership, and other occasions. Well, the CCP doesn’t think the way normal people do. Those “wrong turns” are considered as the “right turns” by the Party.

The disappointment expressed in some quarters comes from unrealistic hopes or expectations.