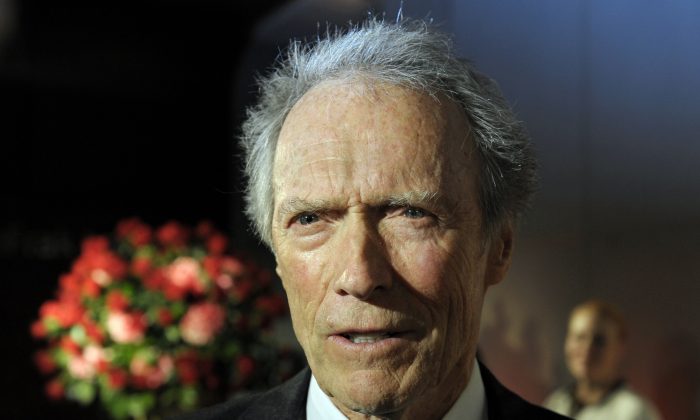 FILE - In this Feb. 1, 2012 file photo, actor and director Clint Eastwood speaks with reporters during the opening of the Warner Bros. Theater at the Smithsonian National Museum of American History in Washington. The National Board of Review thrust its support squarely behind the early 1980s New York drama “A Most Violent Year,” naming it best film and awarding its stars Oscar Isaac and Jessica Chastain. Announcing its annual selections on Tuesday, Dec. 2, 2014, the group also handed best director to Eastwood for his upcoming Navy SEAL drama “American Sniper.” (AP Photo/Cliff Owen, File)
US

Amid the criticism of his film, “American Sniper,” Clint Eastwood offered a succinct yet somewhat confusing response.

A TMZ reporter asked Eastwood this week what he thinks about what filmmaker Michael Moore said about his film.

“Well, they are… they’re right,” he tells the TMZ reporter. The first “they are” part is hard to hear.

However, it’s somewhat unclear if he’s saying “their right”–as in they have the right to criticize his film–or if he’s just saying “they are right” in their assessment.

Moore last month created a media firestorm when he said, “My uncle [was] killed by sniper in WW2. We were taught snipers were cowards. Will shoot you in the back. Snipers aren’t heroes. And invaders are worse.”

It comes as “The SpongeBob Movie: Sponge Out of Water” finally unseated Eastwood’s runaway hit “American Sniper” at the weekend box office, while a pair of high-priced fantasies flopped.

Paramount Pictures’ “SpongeBob Movie” earned $56 million in North America, a huge debut for the animated Nickelodeon big-screen transfer, according to estimates Sunday. That finally pushed “American Sniper” off the top spot after a three-week reign. The Navy SEAL drama took in $24.2 million in its fourth week of wide release.

That gave the box office a couple of lucrative hits and a pair of costly misses to lead the early February weekend.