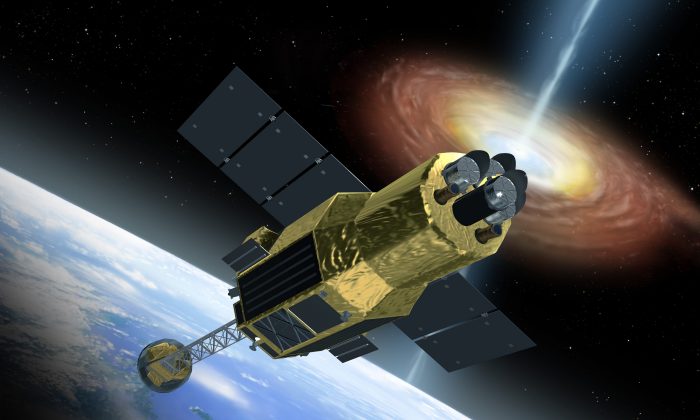 In June 1962, an Aerobee 150 sounding-rocket blasted above the Earth’s atmosphere from the White Sands Missile Range in the United States of America. During its five-minute flight, the small research craft aimed to detect X-rays fluorescing from the moon. What it found instead would take a decade to explain.

X-rays are an extremely high-energy form of electromagnetic radiation. While visible light, from violet to red, has a wavelength of between 400 and 700 nanometers, X-ray wavelengths stretch from only 0.1 to 10 nanometers.

Radiation from the sun extends over both spectrums, but the energy in X-rays is a millionth of that emitted in visible light. The X-rays that reach the Earth are unable to penetrate through our atmosphere, so exploration of cosmic sources needs to be done from space.

Despite being a hundred times more sensitive than previous attempts, no one expected the X-ray detector on board the Aerobee 150 to see many cosmic X-ray sources. Even if our nearest star, Sirius, emitted X-rays as luminous as its visible light (unlikely given the sun’s 1:1,000,000 ratio), it was still far too dim to be seen.

Instead, the rocket was hoping to see the moon’s fluorescence due to the incident X-rays from the sun. But the data rolled in to reveal another source in the sky.

Named Scorpius X-1, this X-ray source was so strong that if its ratio to visible light had matched that of the sun, its brightness would have rivalled the moon from its position 9,000 light years away. This was a whole new type of cosmic engine and marked the birth of X-ray astronomy.

Scorpius X-1 would eventually reveal itself to be a binary of two stars in close orbit. One member of the pair had reached the end of its life and collapsed to form an immensely dense object known as a neutron star.

Its strong gravity was pulling gas off its stellar twin, which gained energy as it descended towards the neutron star, like a stone speeding up as it drops from a tall building. The energy was heating the gas to millions of degrees, causing it to radiate X-rays.

X-ray astronomy moved from short-lived rockets to satellite observatories over the two decades following the Aerobee launch. NASA launched its Einstein observatory in 1978, and in 1979, Japan launched the first of its X-ray telescopes, Hakucho.

These satellites revealed that the darkest regions in the universe were bursting with high-energy activity. The space between clusters of galaxies turned out to be filled with incredibly hot gas that contained more mass than all the cooler optically-visible matter combined.

Gas was seen spiralling into neutron stars like Scorpius X-1 and swirling around their even more mysterious cousins, black holes.

Launch of a New Telescope

The intrigue of this high-energy side of our universe continues and on the evening of February 17 this year, the Japanese Aerospace Exploration Agency (JAXA) launched its sixth X-ray observatory, Hitomi. The telescope is part of an international collaboration with NASA, the European Space Agency (ESA) and a number of other countries.

The satellite will orbit at an altitude of 575 kilometres, taking roughly an hour and a half to circle the Earth. On board are four telescopes of two different types.

Two telescopes focus the soft lower energy X-rays, while the second pair focus the higher energy hard X-rays. There is also a detector for the presence of the even higher energy gamma rays. In total, this allows Hitomi to be sensitive to an impressively broad range of wavelengths between 4 nanometres to 0.002 nanometres.

In addition to forming images, the soft X-ray telescope can measure the strength of the received X-rays at different wavelengths. This process is known as spectrometry and is equivalent to measuring the different strength of colours in the spectrum of visible light.

The spectrometer on-board Hitomi is about 50 times more sensitive for spread-out sources than previous missions, making it the first satellite able to measure the spectra from objects, such as galaxy clusters, in addition to bright point sources like Scorpius X-1.

Such measurements will allow far more accurate values to be placed on the energy in the hot gas, revealing the dynamics of cluster interactions and star formation.

A Name Change for Hitomi

Prior to launch, the satellite telescope was designated ASTRO-H, where the “H” recognises it as JAXA’s eighth planned space observatory, six of which have been X-ray satellites.

On the launch day, the Japanese space agency announced the telescope’s new name was Hitomi, which is Japanese for the pupil of the eye, as it will be the aperture used to explore the X-ray universe.

When announcing Hitomi’s new name, the agency related an ancient folktale about a painter who drew four dragons, but did not include their pupils.

People who looked at the painting said “why don’t you paint Hitomi, it is not complete!” The painter hesitated, but people pressured him. The painter then drew Hitomi on two of the four dragons. Immediately, these dragons came to life and flew up into the sky. The two dragons without Hitomi remained still.

Clearly, the hitomi represented the key part of the painting, as the new Hitomi telescope will surely be on understanding the high-energy universe.

Elizabeth Tasker is an assistant professor at Hokkaido University. This article was previously published on The Conversation.