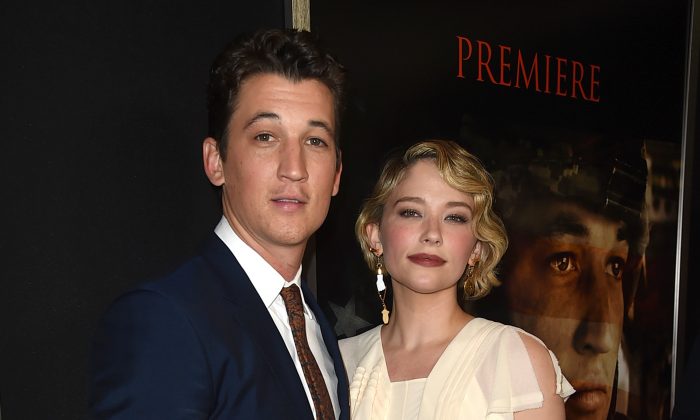 Actors Miles Teller (L) and Haley Bennett arrive at the premiere of DreamWorks Pictures and Universal Pictures' "Thank You For Your Service" at the Regal LA Live Stadium 14 Theatres in Los Angeles, Calif. on Oct. 23, 2017. (Kevin Winter/Getty Images)
Entertainment News

Actor Miles Teller was spotted looking muscular after he left the gym in Los Angeles recently. Teller is currently filming the movie “Top Gun: Maverick,” according to TMZ.

Photos captured by Backgrid UK on Sept. 28 showed Teller has been working out and getting fit for the character of Goose’s son in the upcoming film.

Teller’s also sporting a mustache, which makes him look a lot more like his character’s father in the original “Top Gun.”

It’s not the first time the actor had to work hard to get in shape for a movie role, reported Men’s Journal. For the boxing film “Bleed For This,” Teller transformed his body for the character Vinny.

The “Thank You for Your Service” actor beat out actor Glen Powell this summer to land the role of Goose’s son alongside Tom Cruise and Val Kilmer.

However, Powell was so likable the producers arranged for him to play another smaller role in the 1986 movie’s sequel, reported The Hollywood Reporter.