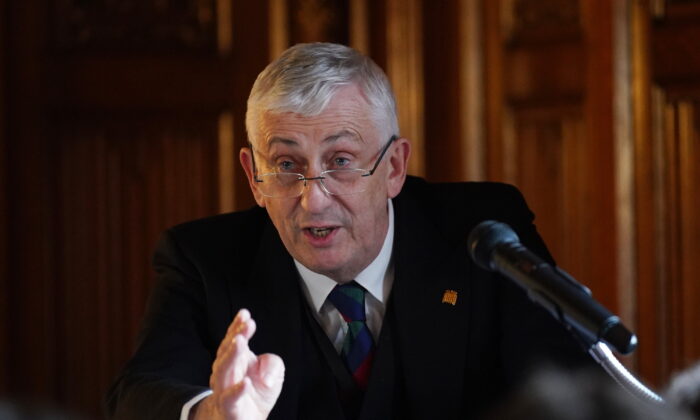 Security has been tightened following an incident in which climate activists glued themselves around the speaker’s chair in the House of Commons chamber, Commons Speaker Sir Lindsay Hoyle hinted on Monday.

Hoyle said parliamentary security and the police have “adjusted their posture accordingly” and that “appropriate action” will be taken to deal with any similar acts on the parliamentary estate in the future.

Three members of Extinction Rebellion (XR), who booked an official tour around Parliament, were seen on Friday superglued to each other around the Speaker’s chair.

A photo posted on the group’s Twitter account shows them hand-in-hand in front of the seat while two other members held up signs. One read “Let the people decide” and the other noted, “Citizens’ assembly now.”

The protest at the Palace of Westminster involved around 50 XR activists, including one who climbed scaffolding near Westminster Hall and two others who used bike locks to chain themselves to the railings at the New Palace Yard entrance.

The Metropolitan Police Service (MPS) made eight arrests and all those arrested have been released on bail.

Opening business in the chamber on Monday after the summer reccess, Hoyle said there were four groups of XR activities in the estate “as ticketholders on paid tours,” one of which glued themselves around the chair.

Hoyle said it was a “real shame” people have had their visits to Parliament disrupted and cancelled following the protest, but “steps are being taken to minimise the risk of a recurrence.”

The MPS is “in close liaison with parliamentary security to establish the full circumstances of this incident,” Hoyle said.

“Given the number of protests and campaigns planned over the coming fortnight, and drawing on the events of Friday, the parliamentary security and MPS have adjusted their posture accordingly,” he added, without going into details.

He stressed that the right of protest is a “fundamental principle” of democracy,” adding that it does not extend to “unlawful activity.”

“The security of parliament and the police will take appropriate action to deal with any such acts on the parliamentary estate in the future,” he added.

Priti Patel, who later on the day resigned as the Home Secretary, voiced her support for Hoyle’s statement.

“I do want to endorse everything Mr. Speaker has just said because we do enjoy the right to lawful peaceful protest but also open democracy as well,” she said, adding, “Those that behave in this way should feel the full force of the law.”

Before Patel’s resignation, she was widely expected to be replaced on Tuesday when new Prime Minister Liz Truss takes office.

In the past few years, climate activists from XR and Insulate Britain have blocked roads, bridges, a printing press, and oil terminals in their disruptive protests. XR has announced a new wave of protests between Sept. 9 and Oct. 14 and “The Big One” in spring next year.

New laws targeting such protests by climate activists and Black Lives Matter activists were passed in the Police, Crime, Sentencing, and Courts Act earlier this year, but the measures have also been criticised over the risks of them being used to curb the freedom of protest.