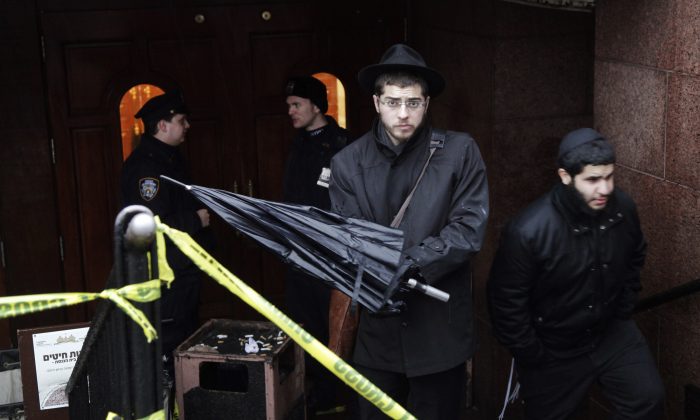 NEW YORK—Authorities are stepping up security at the headquarters of an international Jewish organization in Brooklyn after a mentally ill man wandered inside and stabbed a student in the head. Police shot and killed the man.

Calvin Peters, 49, was seen on amateur video waving a knife in the Chabad-Lubavitch headquarters in Crown Heights at 1:40 a.m. Tuesday after attacking 22-year-old Levi Rosenblat. Rosenblat was listed in stable condition.

New York City police said the stabbing was not believed to be connected to terrorism. But it shook the Jewish community, still reeling over an attack on a Jerusalem synagogue by two Palestinian cousins last month that left four worshippers and an officer dead.

Police Commissioner William Bratton said the department was already on heightened alert based on the incidents in Israel. His deputy commissioner for intelligence and counterterrorism, John Miller, said there was an increased presence at religious locations.

“Given frankly the concern that the news of this story may bring to houses of worship around the city, our critical incident response vehicles which we normally post at sensitive locations depending on what the threat stream of the day is will focus on religious institutions in part,” Miller said.

Chabad-Lubavitch officials said security was tightened, but didn’t elaborate, and wouldn’t say what measures were in place at the time of the attack.

Peters had wandered into the building earlier Monday and was ushered out, then returned after midnight.

The jerky clip of the final confrontation posted online showed Peters in a waist-length jacket and hat with a knife in his right hand. Officers surrounded him with drawn weapons and Jewish students wearing traditional plain Orthodox clothing, urged Peters to calm down and asked officers not to shoot him.

He eventually put the knife down at an officer’s urging and stepped away, but quickly picked it up again as the officer approached him, apparently to arrest him.

Officers yelled at him repeatedly to drop the weapon as Peters moved around, and a single gunshot could be heard. The shooting itself took place outside camera range.

Peters had lunged at the officer with the knife, which had a 4½-inch blade, police said.