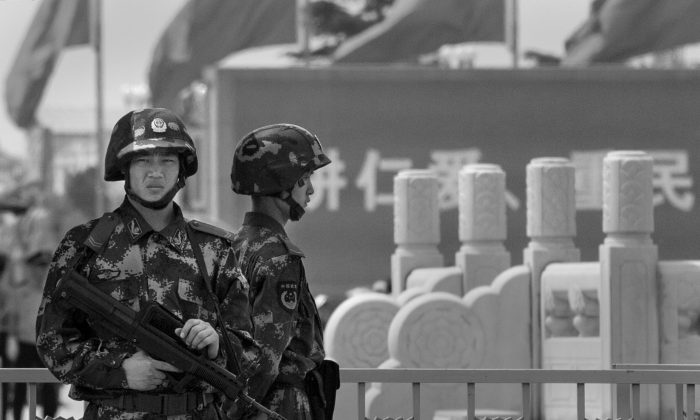 Security Ramped Up in Beijing

Security in Beijing is on alert. Special forces and armed police are patrolling the streets, and street vendors have been recruited to spy on their fellow citizens.

On the squares in front of the four major train stations, the regular police have been joined by armed special forces and police dogs in patrolling the grounds

According to The Beijing News, police officers stationed at those stations are carrying newly issued revolvers.

The platform at Beijing’s South Station used to be a place where petitioners gathered. Now people are not allowed to linger in that area. In the South Station waiting area, a guard was set up to prevent petitioners from entering.

The petitioners have been cleared from the places they usually gathered, and their belongings were confiscated.

Traffic police began carrying guns on June 1, and over 2,700 officials in Beijing were armed and dispersed to join the street patrols.

Special armed forces can be seen at every important intersection, along with a line of armed officers in front the Beijing Municipal Commission and the Appeals Office.

Yang Qiuyu, a Beijing resident, told the Epoch Times, “The authorities ignore the people’s problems and use anti-terrorism as an excuse to point guns at its people. This will only make the people rebel. People used to have some confidence in the government, but not any more.”

On June 20, an “anti-terrorism” meeting was called in Beijing with the agenda to build an intelligence network of 100,000 people that included vendors, newsstand owners, and parking lot managers. The authorities promised cash awards of 1,000 to 40,000 yuan (approximately US$150 to $6,100) to anyone supplying useful information.

Yang said, “The authorities have deceived the shoe repairmen and street vendors into participating in this. The government treats its people like its enemies.”

“Now there are even policemen on the buses. Last Friday I saw 13 police officers streaming out of a bus I took. I couldn’t believe my eyes.”