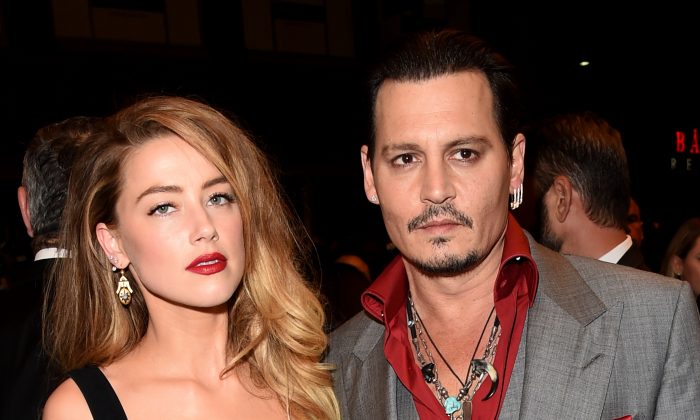 Security guards for Johnny Depp and Amber Heard have commented on Heard’s allegations of abuse.

The two guards, Jerry Judge and Sean Bett, were standing in a door in the middle of an argument that Depp and Heard were having. They heard Heard scream, “Stop hitting me!!!”

However, when they went into the room “within a second” of her screams, they saw Depp sitting in the kitchen and Heard sitting on the couch in the living room, TMZ reported, citing sources close to the case. Depp and Heard were about 20 feet away from one another, they claim.

The guards are expected to testify next month during the couple’s restraining order trial. Last Friday, Heard filed a claim in a Los Angeles court, saying that Depp was physically abusive toward her throughout the entirety of their 18-month marriage. Days before the claim, Heard filed for divorce from Depp.

“The guards—both of whom are expected to testify next month during the restraining order trial—also say throughout Johnny and Amber’s 15-month marriage, she was the one who flew into rages … screaming at him, throwing bottles, and charging him. They claim they frequently had to pull her off Johnny,” TMZ claimed in a report on Tuesday.

Heard claimed her injuries were caused when Depp threw an iPhone at her. Photos that surfaced online last Friday show her with bruises above her right eye. She also appeared to have bruises when she left court.

In reports over the weekend, the Los Angeles Police Department said that when officers responded to Heard and Depp’s apartment when the alleged iPhone abuse took place, they found that no crime had been committed. Cops also said no police report was filed.

On Wednesday, new photos surfaced of Heard’s injuries allegedly caused by Depp during another domestic violence incident. They were published by People magazine. In the court filing, Heard stated that “there was one severe incident in December 2015 when I truly feared for my life.”

And on April 21, Heard, 30, claimed in court Depp, 52, argued with her after showing up at the end of her 30th birthday party “inebriated and high” and then grabbed her hair “violently shoved me to the floor.” On May 21, she said that Depp “began obsessing about something that was untrue” and threw his iPhone at her.

Heard’s lawyer, Samantha Spector, issued a statement Wednesday about the lack of a police report. She wrote:

Amber has suffered through years of physical and psychological abuse at the hands of Johnny. In domestic violence cases, it is not unusual for the perpetrator’s playbook to include miscasting the victim as the villain.”

Since the court appearance, a number of people have spoken up for Depp, including his ex-wife and the mother of his children. His 17-year-old daughter, Lily-Rose, also defended him. Comedian Doug Stanhope, who said he’s a friend of Depp, also penned a blistering article in TheWrap, claiming that Depp is “being blackmailed” by Heard. The article prompted a response from Heard’s legal team, who sent a letter to TheWrap, saying Stanhope’s column is “unequivocally false.”

Depp’s lawyer also filed a memorandum in court against Heard’s claims. The lawyer accused Heard of using the abuse allegations to try to gain an advantage on the “Pirates” actor in their divorce proceedings.