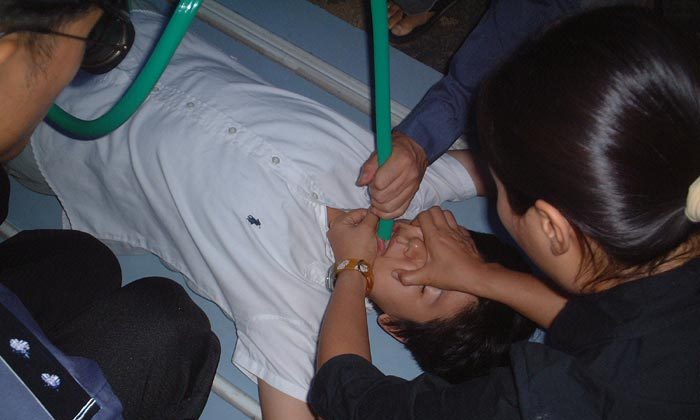 Policemen use a force-feeding torture method on a Falun Gong practitioner at the Hongqiao District Detention Center in Tianjin, China, in this file photo. (Courtesy of Minghui.org)
China

Dragging people from their beds, locking them away in secrecy for months or years, and subjecting them to forced ideological education would not, at first blush, seem like a very productive form of economic activity.

But the officials who run this system in China—which does not even officially exist—seem to be making money hand over fist.

Zang Kuidong, a schoolteacher in Shandong Province and a practitioner of Falun Gong, found after he was let out of a brainwashing center in 2013 that officials had demanded 5,000 yuan ($800, or over six months’ rural income in China) from his employer. The four guards who locked him up extracted a total of 20,000 yuan for housing Zang and three others for a mere two weeks.

The guards even hired a professional chef to prepare their meals—delicious dishes of fish and meats—paying him with the extorted cash. The Falun Gong adherents were given a single plate of simple vegetables to share each night.

The account, from Minghui, a website that carries primary reports of the persecution of Falun Gong in China, explains the lasting appeal for prison guards and security officials across the country of the simple brainwashing center. With these ad hoc facilities, established in abandoned houses, disused governmental buildings, remote hotels, or purpose-built compounds outside suburban areas, guards sometimes known to kill their victims can make a killing off them.

One of the main targets of these brainwashing centers, as they are called in China, are practitioners of Falun Gong, a spiritual discipline that has been persecuted by the authorities since 1999. China’s political police detain Falun Gong adherents and then attempt to force them to a confession giving up their beliefs and pledging allegiance to the Party.

This process was attempted on Xu Ying, an elementary schoolteacher in Heilongjiang Province: she was taken from her workplace in March this year, then placed in the Hailin Forestry Detention Center.

The guards threw her to the ground and stepped on her face, spit on her, and “viciously slapped” her. Later she was tightly handcuffed to a cabinet and made to watch anti-Falun Gong propaganda videos.

Other victims are shocked with electric batons, hung up by their wrists, or have their limbs tied in awkward positions and then wrenched in opposite directions, an agonizing pain that can be prolonged for days as they are shocked, pummeled, kicked, and taunted by guards, who promise them that the torture will end if they simply give up their spiritual beliefs.

The campaign against the practice was a foremost political priority for the Communist Party in the early years of the persecution, led by Jiang Zemin and his appointees. A special Party task force, the 610 Office, was created to oversee the campaign. With a daily propaganda barrage in the media, the Party created an atmosphere of crisis and terror, rounding up and torturing to death Falun Gong adherents across the country.

Although the violence continues, in the last few years the campaign has faded somewhat as a top-level political mission, and the Party last year even moved to close its network of forced labor camps, the primary means it had of locking away Falun Gong adherents.

But the persistence of the campaign of persecution against the practice after 15 years may owe, in some measure, to the vast wealth that officials are able to accumulate by running the brainwashing centers that target Falun Gong practitioners.

“Communist Party security officials have turned the detention and brainwashing centers into a money-making industry, further motivating low-level officials to conduct and continue abuses,” said Erping Zhang, a spokesman for the Falun Dafa Information Center, in an emailed statement.

“On top of innocent Falun Gong detainees and their families being victims of religious persecution, they are also subject to extortion through this corrupt process.”

A recent survey by Minghui, the website featuring firsthand accounts of persecution from China, shows in detail, through a compilation of anecdotes and data gleaned from official media and websites, how security officials are able to profit from running brainwashing centers.

Minghui suggests that there are three main avenues for officials to enrich themselves: embezzling from the investment costs in equipment, facilities, and administration; demanding “fees” from state-run workplaces whose employees they have detained and are attempting to brainwash; and directly extorting the family members of the victims.

Based on incomplete data compiled by Minghui, the authors suggest that the money moving through the brainwashing industry is in the billions of yuan (hundreds of millions of dollars).

Income for officials directly from the regime—including bonuses for successful brainwashing work, and “education fees” for each victim, and fees, or ransoms, extracted from family members who wish to free their detained relatives—range from tens to hundreds of millions of dollars.

For example, when a Falun Gong adherent is sent to a brainwashing center, security officials will go to the employer and demand a monthly “education fee.” This can sometimes be much higher, or even ten times as high, as the average income. Employers, particularly state-run employers, may also be compelled to pay the fees for the “companions” made to accompany the detained victims, who follow them 24 hours a day.

Income through this channel is estimated to be over US$485 million (3 billion yuan) throughout the last 15 years, Minghui suggests. But the actual “companions,” sometimes other prisoners convicted for violent or drug-related crimes, only receive a small stipend for their services, while guards are presumed to take the rest.

The revenue flows are guaranteed by watchful provincial-level 610 Offices, who demand quotas of “transformations”—that is, successful instances of brainwashing—from the centers.

Should a center not receive enough Falun Gong practitioners to meet quotas, local 610 Offices will arrest more practitioners. To assure that employers send an adequate number of employees to be transformed, one district in Nanjing City required employers and residential committees to pay advance deposits on each employee.

A police station in Fushun hired fake Falun Gong practitioners to go be “transformed” when they did not meet their arrest quota. Those employers who refuse to comply are threatened with fines by the 610 Office.

Many of the centers house hundreds of practitioners, such as the Erehu center, where there may be around 400 or 500 Falun Gong practitioners detained.

The head of a center can often accumulate tens of millions of yuan (millions of dollars) in side income while overseeing the operation of a brainwashing center of this scale, Minghui states. These officials often travel on official “training” business, receive large bonuses, and drive luxury vehicles.

The industry has continued to thrive and expand, as labor camp facilities are rebranded as “legal education centers” and used for ideological transformation, states Minghui.

“These illegal centers lock people up and force them to accept the demands of the authorities, to give up their ideals, their aspirations, or their individual choices about life, and completely accept the authorities’ ideas. That’s their political function,” said Tang Jitian, a rights lawyer in China who has been active in litigating against brainwashing centers.

“But in reality, there’s also a financial motivation: the 610 Office, and the political-law officials will extort money and put it in their own pockets. The profit motive is quite prominent, so from this perspective, too, the existence of these organs is a poison to society.”