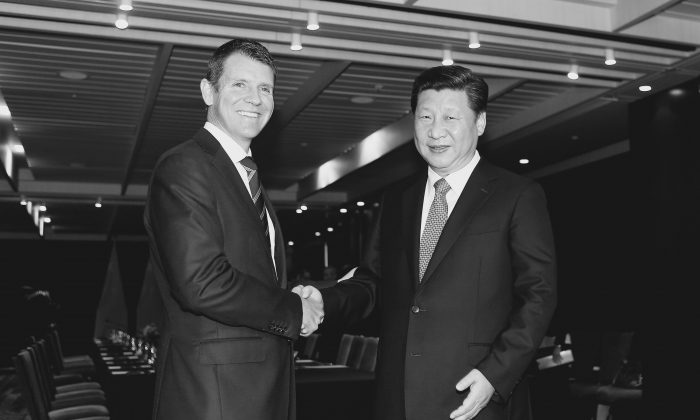 Security Fears and ‘Other’ Issues With Chinese Bidder for NSW Power

With one of the largest state-owned enterprises from communist China in the running to lease TransGrid from the New South Wales government for 99 years, there are serious concerns that the $10 billion electricity transmission and telecommunications network would become vulnerable to cyber-espionage.

In a joint bid with Macquarie, State Grid Corp of China is on the short list with three other groups competing to manage Transgrid’s extensive asset base, including 99 large substations, around 12,900 kilometres of high-voltage transmission lines and cables, and what TransGrid says is the fifth largest optical fibre network in the country.

State Grid applications were just approved by the Foreign Investment Review Board (FIRB), and a decision by NSW government is expected within days. The State Grid-Macquarie consortium is thought to have placed the highest offer, and to be the favoured bidder for the lease, ahead of two other foreign groups, and an Australian-owned one.

State Grid uses technology from Huawei, a state-affiliated firm, to create smart grids by putting domestic electricity meters online to create a so-called Internet of energy. Huawei was banned from being involved with the National Broadband Network 2 years ago, based on advice from ASIO.

Smart grids increase the threat of cyber terrorism and spying, according to several reports given to the US Congress. State Grid’s motives in expanding overseas and creating a global Internet of energy remain unclear, apart from the obvious profits for the world’s largest utility.

Former senior defence official Ross Babbage said that U.S. and Australian security experts and officials are concerned about Communist China gaining control of NSW’s power grid, according to the Daily Telegraph, particularly in the wake of the Port of Darwin sale last month to a Chinese company linked with the People’s Liberation Army.

State Grid already controls 19 per cent of SP Ausnet, a Victorian power company, 41 per cent of ElectraNet in South Australia, and 60 per cent of Jemena in the Northern Territory. It has total ownership of Brazil’s national grid, and owns a significant share of the grids in Portugal, Italy, and the Philippines. Earlier this year, 16 State Grid technicians were denied visa renewals in the Philippines due to national security concerns.

In China, State Grid is currently under investigation by central authorities, with the company management accused of bribery and corruption. An audit in 2014 revealed that more than $1 billion was misappropriated during construction of a long-distance electricity grid.

Top leaders in the firm were found to have abused their positions and accepted bribes to enrich themselves and their families, state-run People’s Net reported on June 17. Five executives—Zhu Zhanglin, Guan Shouzhong, Ma Linguo, Yan Fulong and Wu Zhouchun—have been arrested, according to overseas Chinese news website Bowen Press.

In an exclusive report, Bowen Press stated that State Grid chairman, Liu Zhenya, is allegedly being investigated by the Central Commission for Discipline Inspection (CCDI)— the Communist Party’s anti-corruption agency.

While national security fears and a corruption probe will continue to be associated with State Grid’s foreign operations, a less known issue is the Chinese power company’s abuse of its employees.

Since 1999, the Chinese regime has been brutally persecuting practitioners of Falun Gong, a widespread, spiritual practice whose teachings are based on the principles of truthfulness, compassion and tolerance. To gain favour with top officials involved in the crackdown, many state-owned companies have participated in the persecution.

State Grid has taken part in monitoring, detaining and re-education of Falun Gong practitioners in China, according to the Minghui website, which documents persecution of the practice.

Minghui has reported over 150 cases that directly contravene international human rights law at 21 of State Grid’s 27 provincial-level grid companies. These included dismissing staff, monitoring of staff outside of work by in-house security, pressuring employees to sign promises not to practise Falun Gong, and hosting re-education facilities on company premises.

Eleven employees were persecuted to the point of mental illness or death, and another five are missing. Although these abuses were carried out by state law-enforcement agencies, State Grid’s security departments assisted with the arrest and home searches of 39 employees.

These accounts raise serious concerns that State Grid has not been following international human right standards in its labour practices. Part of the FIRB’s analysis is determining whether an international investor has followed the Organisation for Economic Cooperation and Development’s enterprise obligations, including the United Nation’s Universal Declaration of Human Rights.