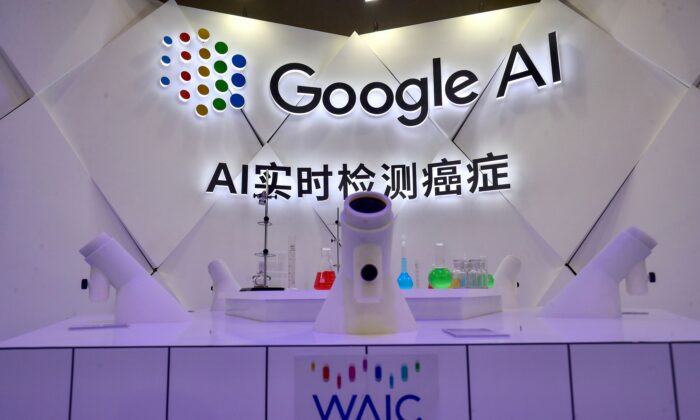 An AI cancer detection microscope by Google is seen during the World Artificial Intelligence Conference 2018 in Shanghai on Sept. 18, 2018. (STR/AFP via Getty Images)
US-China Relations

Security Experts Call for Ban on AI Transfers to China

U.S. tech companies continue to build artificial intelligence (AI) research labs in mainland China, despite the ability of the Chinese Communist Party (CCP) to co-opt any research they do for its own purposes, military and otherwise, experts warn.

The experts believe that the only way to ensure a halt in the growth of the CCP’s AI capabilities is to implement a ban on technology transfers to China from the United States.

According to a 2020 study (pdf) by a think tank at Georgetown University, more than 10 percent of all AI research labs owned and operated by Facebook, Google, IBM, and Microsoft are now located in China. And that number is growing.

U.S. companies also continue to face unbridled intrusion into their intellectual property by the CCP. Both the vulnerability of companies’ research in mainland China and the interference of CCP officials could present a grave threat to international security, according to experts.

Fleming believes that it isn’t possible for U.S. companies to carry out AI research in China without having that research stolen or otherwise co-opted by the CCP or the People’s Liberation Army (PLA), the official name of the regime’s military.

According to Fleming, that state of affairs is a result of the CCP’s military-civil fusion strategy, which seeks to eliminate all barriers between the civil and military spheres with regard to research and development of new technologies.

“When they look at your civil AI, they’re specifically looking at it first and foremost for military applications and secondarily toward commercial applications,” Fleming said. “With the Chinese Communist Party, civil and military are fused. They are one in the same.”

That fusion is one reason why experts have sounded the alarm over the potential military applications of China’s space program. In a similar vein, the CCP has made the full integration of AI into all facets of life a central focus for its military strategy against the United States and plans to be the world’s AI leader by 2030.

Robert Bunker, director of research and analysis at C/O Futures, a consulting company, similarly said that it was “virtually impossible for an American tech company to operate in China and not aid the PLA in developing its AI research and prototyping capabilities.”

“The CCP has infiltrated all the high-tech Chinese corporations with its political and intelligence officers—in fact, those companies cannot operate without such close cooperation with the central government,” Bunker told The Epoch Times in an email.

As such, Fleming and Bunker consider the threat faced by companies conducting AI research in China as also being a potential threat to international security.

That threat materialized earlier this year, when the Chinese regime designated data as a national “factor of production,” allowing the CCP to leverage communist laws to forcibly collect data developed or stored in China.

What shortly followed was a regulatory crackdown on tech companies that the CCP had deemed were amassing too much wealth and data, many of which were heavy with U.S. investments. That crackdown resulted in the loss of roughly $400 billion of value.

All About the Yuan

Given the threats involved in tech collaboration with Beijing, some may wonder why U.S. companies continue pouring money and resources into developing AI laboratories in China.

According to Bunker, the answer is simple.

“This comes down to greed—American corporate greed,” Bunker said. “The AI capabilities being developed are handsomely paid for by the Chinese Communist Party on the backend.”

To that end, the CCP directly invested roughly $65 billion in AI technologies last year, and Chinese diplomats are actively seeking out U.S. businesses to lure them to mainland China.

According to Fleming, U.S. tech companies have a difficult time resisting the false promises of the CCP, all but guaranteeing access to the nation’s largely untapped market of 1.3 billion people. Those companies aren’t getting the deal they signed up for, however.

According to CCP-owned media, more than a quarter of all Silicon Valley startups depended on Chinese investments in 2016. Though that number has since dwindled, much of the damage continues to be felt as those investments offered CCP-backed companies the opportunity to gain early access to U.S. intellectual property.

The Pentagon’s Defense Innovation Unit labeled such efforts as part of a technology transfer strategy and noted that it allowed the CCP and the PLA to effectively purchase cutting-edge technologies at the same time that the U.S. military was acquiring them.

Compounding the issue is the CCP’s 2015 National Security Law, which requires all information systems in China to be made “secure and controllable.” Analysts say that this gives the CCP the power to force companies to hand over invaluable intellectual property, such as source code and encryption keys. A spate of new cybersecurity rules introduced in recent years has further tightened controls of data in China.

As a result of Beijing’s growing clampdown on data, major companies, including IBM, immediately allowed the CCP to review their source code. Other companies, such as Tesla, evaded scrutiny by Chinese authorities for a time by storing data overseas, a practice recently forbidden by the CCP.

In such a scenario, Bunker said that tech companies operating in China were effectively operating as extensions of the PLA.

“If American Big Tech wants to do business in China, and it does for shareholder profit imperatives, it has no choice but to operate under CCP dictates tied back to Xi Jinping and his cronies,” Bunker said. “Google’s and Alphabet’s respective ‘Don’t be evil’ and ‘Do the right thing’ mottoes pretty much go out the window under such conditions.”

Bunker, Fleming, and the Defense Department agree that there’s a clear threat posed to international order by the CCP’s economic coercion and by global companies’ continued desire to develop research facilities in China regardless of CCP interference.

For the experts, the greatest threat, in no uncertain terms, is the fact that the United States doesn’t currently monitor, restrict, or ban foreign venture investments in, nor the transfer of, early-stage technologies with potential military applications, including AI.

Fleming believes that the United States needs to better adapt its laws in accordance with an understanding that it’s engaged in a war with the CCP—a non-conventional, hybrid form of war, wherein the CCP is determined to ignore all rules at the expense of international order.

“It’s war,” Fleming said. “The problem is that it’s a war that we as Westerners don’t understand. We only think in terms of uniforms, troops, ships, guns, planes, and bombs.”

That unrestricted hybrid warfare aims to blend the political, economic, and cyber capabilities of the CCP to do all of the damage of a kinetic war without risking any of the repercussions.

Such a war will continue unabated until the United States puts a stop to the one-way flow of emergent technologies to Beijing from Silicon Valley, according to Fleming.

“The technology should be categorized as national security software or technology, and therefore precluded from distribution to adversarial nation-states,” Fleming said. “The classification doesn’t exist right now, for the most part.”

“Our laws have not caught up with technology.”

To that end, then-President Donald Trump signed an executive order in 2020 to help guide federal development on the use of AI. Other efforts by the Trump administration to limit the transfer of AI to China were blunted, however, and ultimately only limited AI exports to China that dealt with geospatial imaging software.

It’s currently unclear how the Biden administration will respond to the situation. For Bunker, however, the answer is clear: Stop the flow.

“The U.S. government needs blanket high-tech and critical technology transfer bans between American and Chinese corporations for starters,” he said.

“American companies are directly responsible for providing the CCP regime with its initial military AI startup capability. This is already haunting us in the increasing great power confrontation between Chinese authoritarianism and American liberal-democracy taking place.”