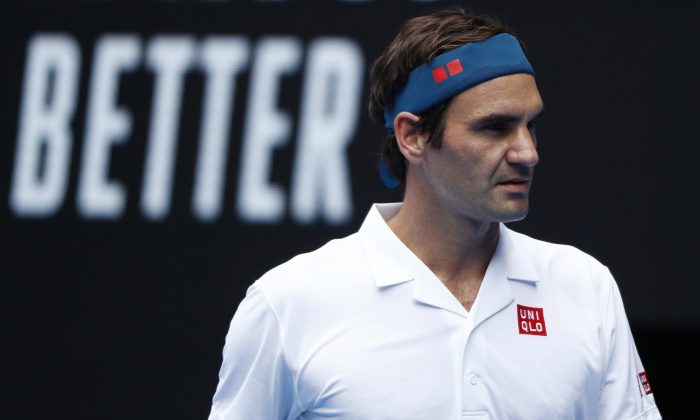 Switzerland's Roger Federer during the match against Britain's Dan Evans at the Australia Open in Melbourne, Australia, on Jan 16, 2019. (Edgar Su/Reuters)
Sports News

One of the top three tennis world champions, Roger Federer has been stopped from entering parts of Melbourne Park at the Australian Open competition.

A viral video clip dated Jan. 20 shows security blocking the 20-time Swiss Grand Slam champion, and one of the most recognizable people on the planet, from accessing a locker room.

The security guard, who appears to take his job and the rules very seriously, stopped Federer because he was not carrying his tournament accreditation at the time.

The event organizers defended the high security, saying “Even @rogerfederer needs his accreditation” in a Twitter post.

Even @rogerfederer needs his accreditation 😂#AusOpen (via @Eurosport_UK)

Competitors, staff, and the press must wear identification badges on lanyards around the necks to access secure areas at Melbourne Park. The guard demonstrated that even Federer, 37, is not allowed to move freely through restricted areas without it.

Federer is defending his title for a record seventh Australian Open title against Stefanos Tsitsipas from Greece in the fourth round.

The double defending champion did not argue with the security guard. Federer stopped as directed and patiently waited for his entourage to catch up with him.

The security guard finally let Federer in when one of his teammates presented the valid badge to security who nodded and smiled, knowing Federer was not an imposter.

The incident has already gone viral and prompted several Twitter users to add their shock and disbelief that security at the Australia Open does not recognize well-known competitors.

“Roger who? Doesn’t ring a bell, sorry. Even @rogerfederer needs his accreditation,” ATP Tour said in a Twitter post.

Even @rogerfederer needs his accreditation 🚫

“I’m in no way comparing myself to Federer but those security people take their jobs way seriously,” one fan said on Twitter.

I mean, I’m in no way comparing myself to Federer, but those security people take their jobs way SERIOUSLY. 😂

“I guess they are technically doing their jobs but c’mon … it’s Federer,” Sportsnet 650 Vancouver Sports Anchor Adam Forsythe said in a Twitter post.

I guess they are technically doing their jobs, but cmon…. it's Federer

“As anyone who has spent any time in Australia knows, this supposedly laid-back country is actually a stickler for rules,” British tennis writer Simon Briggs said in a Twitter post.

Several more posts commended the dedication of the security guard and Federer’s patience in resolving the matter.

“Top job by the security and top behavior by @rogerfederer there. #Respect,” one fan said in a Twitter post.

Top job by the security and top behavior by @rogerfederer there. #Respect https://t.co/gobKpBQ3ax

“Big shout out to this security guard, who wouldn’t let Roger Federer in because he wasn’t wearing his credential,” Sports Illustrated Tennis said in a Twitter post. “Commitment to the job. Gotta love it.”

Big shoutout to this security guard, who wouldn't let Roger Federer in because he wasn't wearing his credential 😂😂

Federer is not the first tennis champion to be prevented from entering the Australian Open.

Five-time grand slam champion Maria Sharapova was involved in a similar incident because she hung her accreditation pass on her shoulder bag instead of wearing it around her neck.

Event security stopped her and asked to see the badge. Sharapova did as she was told and calmly showed the identification before being allowed to enter.

“Security not quite familiar with Maria Sharapova it seems #AusOpen,” Around the Horn Media founder John Horn said in a Twitter post.

Security not quite familiar with Maria Sharapova it seems #AusOpen pic.twitter.com/29BFPOYRvo