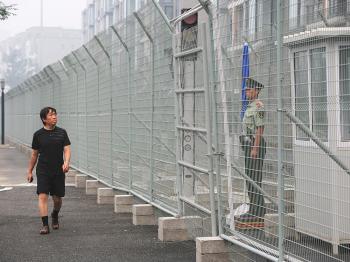 A Chinese military tank sits outside the National stadium prior to the start of the Opening Ceremony for the 2008 Beijing Summer Olympics on August 8, 2008. (Cameron Spencer/Getty Images)
News

Wang Wei, a senior official of the Beijing Organizing Committee for the Olympic Games (BOCOG,) told journalists at Tuesday’s daily joint briefing of the International Olympic Committee (IOC) and the Chinese Organizing Committee that the increased security measures were because of the stabbing death of American tourist Todd Bachman.

On August 8, while visiting a popular Beijing tourist site the first day of the Games, American businessman Todd Bachman was attacked and killed; his wife Barbara and their Chinese tour guide were critically injured.

As a result, event organizers increased security measures at major tourist locations and installed security screenings at Olympics venues, while also placing snipers at the gates to the athlete’s village and stationing an armored tank in front of the Main Media Center.

Journalists who saw the tank as they walked past on their way to work thought there was a security crisis and took up the matter with Mr. Wang at the joint briefing. Mr. Wang said he had no knowledge of the tank being deployed.

“I'm not privy to who deployed this, but we must be protective,” he said, before adding, “I don’t think this is surprising in Beijing.”

Lining Beijing’s streets are 100,000 armed, green-uniformed Chinese army security personnel and more than 1 million volunteers acting as eyes and ears for unwanted activities. AOC president John Coates said it puts a damper on the usual joyful atmosphere at the games.

Mr Coates said it comes down to organizers putting most of their efforts into security. “They haven't been able to manage the balance between security and creating that atmosphere, I suppose."

It was also disappointing to see low crowd numbers at events, commented Mr. Coates, who also urged athletes to wear their national colors while out of Olympic areas as a security precaution.