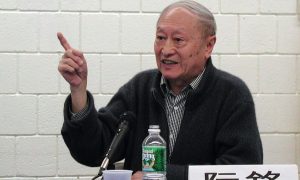 Controversy has arisen over the secret execution on July 12 of a Chinese businessman, called a fraudster by the Chinese judiciary, in a case that has drawn speculation from a number of high-profile intellectuals in China.

Self-made businessman Zeng Chengjie from Hunan Province was at one stage in his career well-respected, and praised by Chinese state-run media. In May 2011, he was convicted for swindling $460 million from 57,000 investors for funding his real estate development company, after investment rules changed.

After his execution, his body was cremated without the family’s permission or knowledge. Authorities feared a backlash of negative public opinion if they had told the family beforehand of the impending execution, according to Beijing human rights lawyer Li Jinglin, speaking to Sound of Hope Radio (SOH), an independent Chinese-language broadcaster.

She claimed that local regime officials had colluded with Zeng in illegal fund-raising activities, but pulled out once they sensed the political winds were changing, leaving her father the only one incriminated. In the aftermath, a regime-owned asset management company profited from Zeng’s sold assets, according to Zeng’s lawyer.

Zeng’s daughter also found fault with the way authorities had quickly sold off Zeng’s company, and how the court had never evaluated Zeng’s assets before sentencing him. “Is this legal?” Zeng’s daughter demanded to know in a video on Sohu, a Chinese Internet portal.

A post from the official Weibo account from the court that oversaw Zeng’s case argued that family visits to inmates on death row aren’t guaranteed by Chinese law. When some netizens identified a Chinese Supreme Court judgment that did guarantee this right, the court Weibo account deleted its post.

Netizens screenshot the post as evidence of the court’s shoddy handling of Zeng’s case.

Whether the regime should be allowed to sentence businessmen to death for economic crimes has been hotly debated online in China.

“Killing entrepreneurs—the future of this country is growing dimmer and dimmer,” said a lawyer in Hunan Province, Lin Qingping.

“The entire episode with Zeng Chengjie is a warning to Chinese businessmen: Get out of China and get your money out. Just watch what happens next, if you idiots don’t believe me,” wrote He Bing, vice chairman of the top-ranked law school inside China’s University of Political Science and Law. His post was reblogged over 25,000 times and provoked 7,000 replies.

The Weibo account of South Winds Magazine expressed similar sentiments, “Every business entrepreneur should be paying attention to Zeng Chenjie’s secret execution,” the state-run Guangzhou Province magazine said. “Will this convince businessmen to jump ship? Is power worth more than your life and money?”

“Hubris from local officials and the callousness of the justice system are simply beyond the imagination of everyday people,” Yang Bin, a prosecutor in the southern province of Guangdong wrote on Weibo, in a post that was later deleted by regime monitors.

Some suspected that Zeng’s execution was kept secret to hide that his organs were potentially harvested and sold on the black market.

“But it’s illegal to cremate him,” a well-known Chinese scholar Wu Zuolai (no relation) replied.

“I bet his organs are already in somebody else,” commented He Bing, the law school vice chairman.

Recently the number cases of corrupt officials held on trial has skyrocketed, as the Chinese Communist Party’s new leader, Xi Jinping, continues to roll out an anti-corruption campaign meant to consolidate the Party leadership. Former rail minister Liu Zhijun was given a suspended death sentence on July 8 over charges of corruption, including accepting over $10 million in bribes.

Li Jinglin, the human rights lawyer, told SOH that the differences between Liu and Zeng were also a source of outrage for netizens.

“When people compared Zeng to Liu Zhiujun, they realized that Liu is a corrupt man who attempted to satisfy his insatiable greed, making Zeng, who encouraged business and contributed to society, look great in comparison,” said Li.

“When the greater man gets the death penalty and the more corrupt one lives on—to many people that’s unacceptable.”