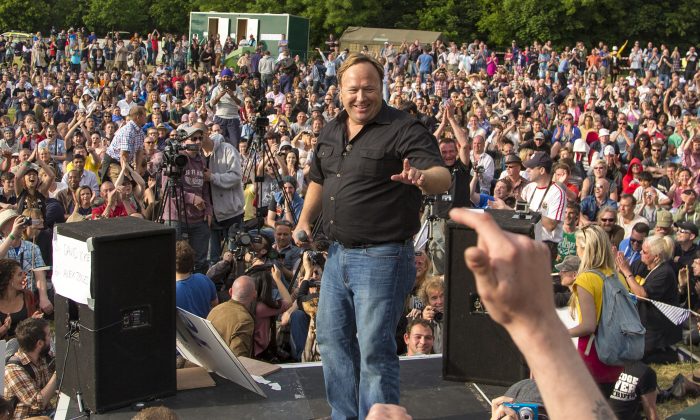 Alternative media broadcaster Alex Jones delivers a speech to 2,000 protesters who had gathered at this year’s venue for the Bilderberg Group meeting in Watford. (Simon Gross/Epoch Times)
International

Watford hosts 140 world leaders in business, politics, and academia, while 2,000 protesters gather outside
By John Smithies

Driving through Watford on Saturday afternoon you’d be forgiven for thinking you were entering a police state. Rows of officers lined the wooded lanes surrounding the Grove Hotel, the exclusive, secluded venue for this year’s Bilderberg Group conference.

The secretive conference – promoted as something of a talking shop – was attended by around 140 of the world’s leaders in banking, business, politics, and royalty. MPs George Osborne and Ed Balls were there, and David Cameron also attended on Friday, June 7th. Eric Schmidt, head of Google, and Amazon’s Jeff Bezos were also in attendance, along with Henry Kissinger.

For the first time in the 59-year history of the Group, a Bilderberg Fringe Festival was organised in one corner of the Grove Hotel’s sprawling estate. While fairly quiet on the opening Thursday of the conference, by Saturday the number of protesters had swelled to around 2,000 – so much so that hundreds had to be turned away.

Many in the audience had diverse opinions on the Bilderberg Group’s role in world events – ranging from a shadow government to a satanic cabal – but all could agree on one thing: they demanded greater transparency.

This year, too, marked the first time Bilderberg went mainstream, with blanket coverage across most British media outlets.

Comedy writer and Bilderberg enthusiast Charlie Skelton became something of an unofficial spokesman for Bilderberg (given the lack of official press representation).

“I used to come because nobody else did. So it looks like I’m out of a job,” he said on Thursday. “There’s a large press battalion of press – Sky News, Channel 4 News, The Times … you name it. What you see now is historic, it really is.”

Investigative journalist Tony Gosling said that this year marked a huge change for the Bilderberg Group.

“Ten years ago there would only be a handful of freelance journalists and curious onlookers,” he said. “There was absolute silence in the press about it, and no consciousness amongst the public or politicians.”

The Bilderberg Group website says it is a forum for informal, off-the-record discussions about megatrends and the major issues facing the world. “Thanks to the private nature of the conference, the participants are not bound by the conventions of office or by pre-agreed positions. As such, they can take time to listen, reflect and gather insights,” says a statement. “There is no detailed agenda, no resolutions are proposed, no votes are taken, and no policy statements are issued.”

MEP Gerard Batten, who was there as a representative of UKIP, said: “They have a website, they say that it is just a discussion, and there are no conclusions. I’d like to see a list of their decisions and action points – they say they don’t arrive at any.

“My biggest question is why the media haven’t reported on all this in the last 59 years to any degree, and why it’s all been kept secret. That’s the biggest mystery of all.”

Skelton, too, was keen to see transparency: “I’m just in favour of conversation, and for people behaving like adults and for them to comport themselves in the world like what they are, which is a major international summit full of powerful people talking,” he said.

Ken Clarke, who has been a member of the Bilderberg Group’s steering committee for a decade, dismissed any claims of the Group’s influence on policy as “nonsense”, during an urgent question at the House of Commons on Monday, June 10th.

“We go there for the chance of having an off-the-record, informal discussion with [a] range of people … who are indeed distinguished but who are not remotely interested in getting together to decide anything,” he said.
The Fringe Festival was dominated by the presence of US alternative media broadcaster Alex Jones, who arrived on the Thursday surrounded by throngs of reporters.

“We’ve had a huge victory in the fact that they tried to deny that this thing exists, and now we’ve forced it into hundreds of newspapers,” he said.

Jones said that the group operates as a “shadow government above the government, a shadow world government”.

Following a rabble-rousing speech on Saturday evening in which he praised the “incredible humanity” of the protesters, Jones appeared on the BBC’s Sunday Politics show, during which his confrontational personality provoked mocking from host Andrew Neil.

Some protesters, like Massimiliano Bonavoglia from Italy, travelled a long way to the four-day event in Watford.

“If they don’t have anything to cover up, why are they doing something like this, not in front of the people? The politicians go in dark cars, they are hidden, and they don’t want to say what is going on after the meeting,” said Bonavoglia.

The Grove Hotel was surrounded by a steel wall that rings the hotel from half a mile away, quickly dubbed The Great Wall of Watford.

Campaign Liaison Officer from Hertfordshire Police Steve Lee said the wall wasn’t to stop people from protesting. “That is a measure to protect the people inside. Any high profile individuals are subject to a number of risks from various international organisations, and that is geared up to protect them.”

According to the police, the security was “cost neutral” to the taxpayer. “How that funding breaks down is something I don’t have any knowledge on,” said Lee.

Charlie Skelton summed up what many saw as a watershed year for Bilderberg: “I think a relationship between press, public, and the Bilderberg Group has been irreparably formed.”