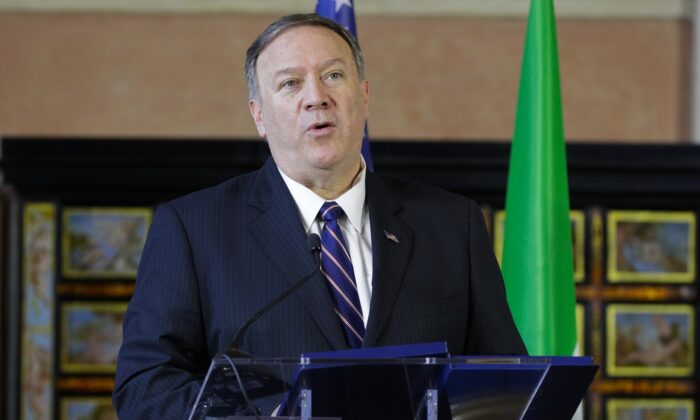 Secretary of State Mike Pompeo said he was on the phone while President Donald Trump spoke with Volodymyr Zelensky, his Ukrainian counterpart, in July.

“I was on the phone call,” Pompeo told reporters in Rome during a news conference with his Italian counterpart Luigi Di Maio on Wednesday, Oct. 2.

The call was the main focus of a complaint filed against Trump alleging Trump abused the office of the president.

A transcript of the call was released in September, as was the complaint.

Pompeo did not give information about the contents of the call, saying only that he was well-versed in U.S. policy toward Ukraine.

Democrats launched an impeachment inquiry based on the complaint and the phone call, accusing Trump of wrongdoing during the call.

Trump asked Zelensky if he could look into Crowdstrike, a technology firm that examined the Democratic National Committee’s computer network after it was hacked several years ago, and later brought up former Vice President Joe Biden and Biden’s son, Hunter Biden.

While still in office, Biden in 2016 pressured then-Ukrainian President Petro Poroshenko to fire a prosecutor who was probing Burisma, a company Hunter Biden sat on the board for.

Biden bragged last year during an event that he threatened to withhold $1 billion in aid unless Poroshenko ousted the prosecutor, Viktor Shokin.

Shokin said in a recently released affidavit that Poroshenko pressured him several times to wrap up the probe, and when he refused, he was told he’d have to go. He submitted his resignation, he said, but sought to get that decision overturned after hearing of Biden’s comments.

At the press conference on Wednesday, Pompeo also reiterated that House investigators contacted current and former State Department employees and told them they could not bring State Department counsel to depositions House Democrats want done.

Former U.S. ambassador to Ukraine Marie Yovanovitch was supposed to have her deposition in a closed session with the House Intelligence Committee on Oct. 3, but Pompeo said in a letter to the chairman of that committee, Rep. Adam Schiff (D-Calif.), and other Democratic chairmen that there hasn’t been adequate time for Yovanovitch and four others to secure counsel and for that counsel to consult with the State Department.

He also noted that the committees had not issued subpoenas so the five people did not necessarily have to sit for depositions.

Kurt Volker, the former U.S. Special Representative to Ukraine, was slated to sit for a deposition on Thursday.

Pompeo in the letter accused the chairmen of “an attempt to intimidate, bully, and treat improperly the distinguished professionals of the Department of State, including several career foreign service officers.”

In response, the chairmen accused Pompeo of “protecting the president.”