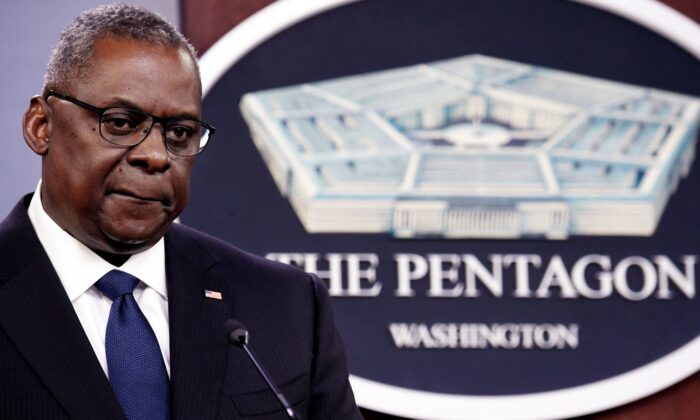 Secretary of Defense: US Can’t Collect ‘Large Numbers’ of Americans From Afghanistan

U.S. Secretary of Defense Lloyd Austin said on Aug. 18 that the military doesn’t have the capacity to collect “large numbers” of Americans who may be struggling to escape Afghanistan.

Austin’s remarks were in response to questions about the Taliban allegedly blocking Afghan allies from reaching Kabul’s international airport, as well as concerns about the possibility of thousands of Americans being stranded in Afghanistan if the military sticks to its Aug. 31 withdrawal deadline.

Austin and the State Department gave differing accounts of what’s happening on the ground in Kabul.

“We will continue to coordinate and deconflict with the Taliban, and make sure that those people who need to get to the airfield have the right credentials to ensure passage,” Austin said. “And the Taliban has been checking those credentials—and if they have them, they have allowed them to pass.”

However, in an Aug. 18 statement, the U.S. Embassy in Kabul said that “the United States government cannot ensure safe passage to Hamid Karzai International Airport.”

Shortly afterward, Deputy Secretary of State Wendy Sherman, the second-highest-ranking U.S. diplomat, confirmed in a press conference reports that the Taliban are preventing some Afghans from getting to the airport. Some videos uploaded online show apparent Taliban members hitting people with sticks and whips who were trying to get into the facility.

“We have seen reports that the Taliban, contrary to their public statements and their commitments to our government, are blocking Afghans who wish to leave the country from reaching the airport,” Sherman told reporters, noting that “many, many” Americans, U.S. residents, and Afghans at risk have been arriving at the airport.

“I will tell you this, in spite of the obstacles, many, many Afghans in all of the categories are finding their way to the airport.”

Austin told reporters that the United States will continue to rely on diplomacy with the Taliban rather than using force. The roughly 4,500 troops on the ground are required to defend the airport, he said, stressing the importance of preventing another deadly incident with citizens flooding the runway.

“The forces that we have are focused on security of the airfield. You know what happens if we lose the ability to provide that security. I don’t want to detract from that [reports of people struggling to reach the airport]—but we have to make sure we can not only secure the airfield, but defend it as well,” Austin said.

A reporter pressed Austin on the issue of whether more could be done to evacuate Americans, pointing out that there are special forces on the ground that have the capacity to extract Americans from around Kabul and beyond. But Austin said those forces are unable to collect the large numbers of people that need evacuation.

Mark Milley, the Chairman of the Joint Chiefs of Staff, was also at the Aug. 18 press conference, and he provided an update on the outflow of evacuees. According to Milley, there are two main entry points for people to get to the Kabul airport—one processing about 150 evacuees per hour, and the other about 350.

Reports have estimated up to roughly 15,000 Americans remaining in Afghanistan, as well as untold tens of thousands of people who assisted the United States over the last 20 years.

Unsatisfied with the answers, one reporter questioned Austin and Milley about why they’re “leaving the tens of thousands of Afghans who’ve helped us over the past 20 years behind” rather than doing more militarily. Austin said they’re doing all they can.

“As I said, we’re going to evacuate everybody that we can physically, possibly evacuate,” Austin said. “And we’ll conduct this process for as long as we possibly can.”

Some national security commentators took issue with the reporters’ questions, accusing the press of being tougher when the United States tries to exit a war than when it’s trying to start one.

“America creates the TSA, sees air travel and airports get worse for decades, fails to control anything for 20 years in Afghanistan. Media: ‘Why can’t Biden pull off a perfect withdrawal from the Kabul airport in a country where the government just collapsed?’”