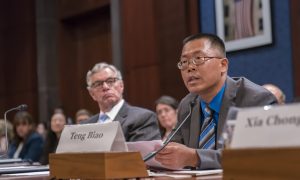 Plainclothes police officers gesture to stop photographs from being taken in front of the number 2 intermediate people's court in Tianjin on December 26, 2018, where the trial of human rights lawyer Wang Quanzhang is set to begin. (NICOLAS ASFOURI/AFP/Getty Images)
China Human Rights

The trial of prominent Chinese human-rights lawyer Wang Quanzhang, which was closed to the public, ended just hours after it began on Dec. 26.

Wang, who took on cases defending citizens from state abuse—such as Christians and adherents of the banned Falun Gong spiritual movement who have been detained for their faith—was charged with subverting state power, a charge often used to prosecute dissidents and rights activists. He went missing in August 2015 during a sweeping crackdown on rights activists across the country, known as the “709” crackdown.

The No. 2 Intermediate People’s Court in the northern city of Tianjin claimed that because Wang’s case involved “state secrets,” it would be a closed trial. Wang’s wife, Li Wenzu, was among those prevented from attending.

Roughly four hours after the hearing began at 8:30 a.m., the court adjourned. At around 3:45 p.m, the court posted a notice online that indicated a verdict will be announced at a later date.

Speaking to the Chinese-language Epoch Times, human-rights lawyer Xie Yanyi said that it was suspicious for the trial to end so quickly. “I feel there is reason to suspect that independent judicial power was not exercised,” he said. “[The court] deprived Wang of his rights and wanted to end the trial as quickly as possible.”

Li Wenzu recently shaved her head to protest the treatment of her husband by the Chinese Communist Party (CCP).

Li and Wang Qiaoling, the wife of another arrested lawyer, left their homes in Beijing at 5:30 a.m. to attend the trial. According to Wang’s Twitter post, as they exited their building, a group of people approached them with bright lights and cameras. She wrote that she and Li were relieved, thinking that it was reporters who were approaching.

However, they were met by a group of flashlight-wielding Internal Security Bureau officers. The Bureau is a police force specifically for controlling dissidents and activists.

An officer, who informed them that the proceedings were closed to the public, offered to drive them to the trial. Both Wang and Li declined the offer and attempted to travel on their own, only to find all six exits of their housing complex blocked by officers.

Wang’s supporters, reporters, and foreign diplomats from the United States and some European countries also weren’t allowed to attend, according to the Associated Press. More than 20 plainclothes police officers stood outside the court, preventing anyone from entering.

Since being jailed, Wang has been cut off from his own lawyer and his family.

Wang is the latest victim in a continuing string of both secret and show trials. Lawyers are harassed or beaten, and evidence is withheld.

Court dates are changed without warning. Li was only recently informed by a government lawyer that her husband’s trial date had been changed to two days later than originally scheduled.