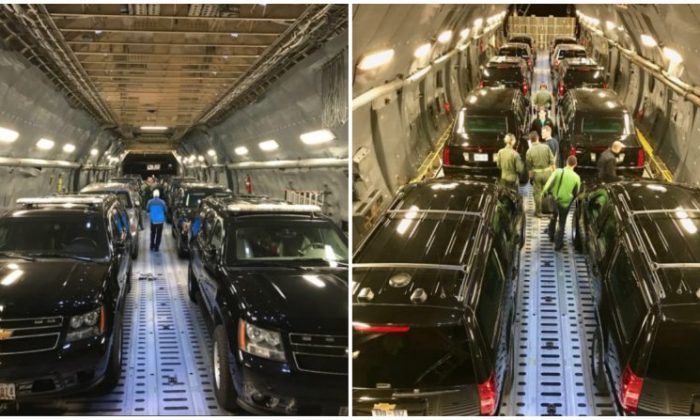 The presidential motorcade aboard a transport aircraft in a photo shared by the Secret Service on Nov. 4, 2017. (Secret Service)
US News

The U.S. Secret Service shared a rare sneak peek on Saturday inside the aircraft that carries the presidential motorcade.

President Donald Trump’s limousine, codenamed “The Beast,” can be seen among a lineup of Chevrolet Suburban armored SUVs.

The president started a 12-day trip to Asia on Friday, Nov. 3,  with stops in China and Japan. Trump’s motorcade is following him inside a C-17 Globemaster transport aircraft, Fox News reported.

“With #POTUSinAsia we couldn’t very well leave ‘The Beast’ behind!”, the Secret Service tweeted Saturday.

“The Beast” is a specialty Cadillac limousine designed under a shroud of secrecy. It carries the president and operates out of a classified motor pool operated by the Secret Service.

The car is armored against ballistic, explosive and chemical weapon attacks. Advanced communications equipment and medical supplies are also on board.

Trump was to ride in an all-new model upon taking office, but the car was still in the works on Inauguration Day. General Motors has a $16 million contract to build an unspecified quantity of the new “Beast.” Spy photos showed the car going through a test drive back in January.

Trump has been riding the car that predecessor, Barack Obama used until the new “Beast” is rolled out. That car was introduced on the inauguration day on Jan. 20, 2009. It is believed that the Secret Service maintains 12 copies of the 2009 Beast.

Although little is known about the car, experts speculate that it weighs from 15,000 to 20,000 pounds. Given the extensive weight, the car’s maximum speed is estimated to be 60 mph with a fuel economy of about 4-8 miles per gallon.

Despite its looks, the new Cadillac limo Trump will ride in is actually an armored truck. A spy photo obtained by Fox News in February shows the limo dwarfing a Chevrolet Suburban in terms of size. It is believed to be built on a medium or heavy-duty truck chassis, Fox News reported.

“It is Cadillac’s great honor to design and build the presidential limousine, a great American tradition,” a spokesperson for Lincoln said, referring further comments to the Secret Service.