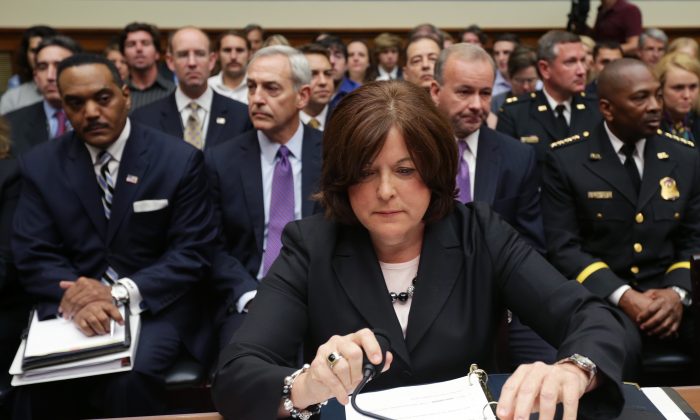 Secret Service Director Julia Pierson stayed impassive under a barrage of criticism at a congressional hearing on the agency’s shortcomings on Tuesday. The only signs that she was unsettled were a couple of mangled words and a misstatement, a big one. She said agents handle 300 attempted incursions into the White House each day. She meant each year. In several responses, the 30-year veteran seemed to be trying to evade responsibility for the problems.

“This is disgraceful. This is beyond the pale. I wish to God you protected the White House like you are protecting your reputation here today,” said Democratic Rep. Stephen Lynch.

In a courteous tone, he added, “I’m sorry, I hate to be critical, but we have a lot at stake here.”

GOP Rep. Jason Chaffetz of Utah, who has led Congress’s investigation, said afterward, “The more I learn, the more it scares me.” He also repeatedly said he wanted any intruder on the White House grounds to be met with “overwhelming force.”

The hearing came a day after a new development in the story of Army veteran Omar J. Gonzalez, who entered the White House with a knife in his pocket Sept. 19. Previously he was questioned near the president’s house while carrying an axe. The first public information about the September incident was contradicted in a Washington Post story on Monday. Gonzales scaled the fence and got as far as the East Room, rather than being blocked just inside the front door as the first stories said.

Secret Service whistleblowers had to approach the paper to make the rest of the story public.

Several legislators hammered at the concern that Secret Service agents feel unable to tell their superiors about security problems.

Others wanted to know if there was a way to automatically lock the door of the White House, since Gonzalez entered while a person was trying to lock the door by hand.

Pierson said an automatic lock had already been added.

The greatest concern seemed to be with the culture of the Secret Service, if it had become dysfunctional, and if agents were demoralized.

Pierson said she did not know why Gonzalez was not intercepted earlier.

“Personnel actions will be taken” once the agency’s review is complete, she said, in what appeared to be a euphemism for possible discipline or terminations. Lawmakers stopped short of calling on her to resign.

Chaffetz said he was not there “yet.” Lynch said, “Let’s just say I’m not impressed with how she has dealt with White House security.”

President Barack Obama and his daughters had left for Camp David shortly before the episode; Michelle Obama had gone to the retreat earlier in the day.

Obama continues to have confidence in the Secret Service, White House press secretary Josh Earnest said Tuesday, though the spokesman urged the agency to release nonclassified results from its investigation as soon as possible. He cited a “legitimate public interest in this matter because it relates to the safety and security of the commander in chief.”

Even when their protectors fall short, presidents rarely publicly criticize those who risk their lives to keep the first family safe, but rather express appreciation for their service. That means Congress provides the only real public oversight of the Secret Service.

And Pierson’s assurances left lawmakers cold. They were aghast, too, about a four-day delay in 2011 before the Secret Service realized a man had fired a high-powered rifle at the White House.

The Washington Post reported on the weekend that some Secret Service officers believed immediately that shots had been fired into the mansion but they were “largely ignored” or afraid to challenge their bosses’ conclusions that the shooting was not directed at the White House.

Such breaches, combined with recurring reports of misbehavior within the agency, cause “many people to ask whether there is a much broader problem with the Secret Service,” said Rep. Elijah Cummings of Maryland, top Democrat on the committee.

“The fact is the system broke down,” said committee chairman Darrell Issa. “An intruder walked in the front door of the White House, and that is unacceptable.”

Members of Congress briefed earlier by the agency apparently weren’t told of the full extent of the breaches. And the Secret Service wrongly told The Associated Press that the intruder was not armed.