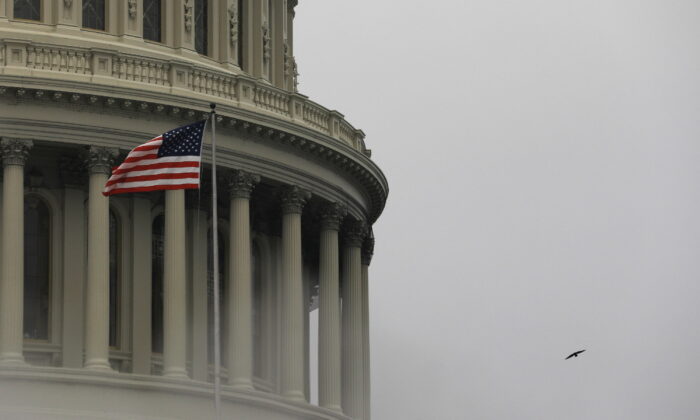 Government watchdog group Citizens for Responsibility and Ethics in Washington (CREW) in a recent report criticized the U.S. Secret Service for failing to transmit a threat made against Speaker of the House Nancy Pelosi (D-Calif.) to the U.S. Capitol Police (USCP) on Jan. 6, 2021.

CREW’s Aug. 17 report reports email communications between various law enforcement and other officials on Jan. 6, including an email by the Secret Service to the USCP warning of a social media threat against Pelosi.

Included in these emails was a 5:55 p.m. ET email from the Secret Service to the USCP “passing notification to the US Capitol Police regarding discovery of a social media threat directed toward Speaker Nancy Pelosi.”

This email came hours after the end of disturbances at the Capitol on Jan. 6.

According to the emails gathered by CREW, the Secret Service knew about some social media threats as early as Jan. 4, 2021.

The account in question, which CREW does not name, posted the following to social media platform Parler that day: “January 6 starts #1776 all over again!! Fight for God! Fight for Your Freedom!! Fight for Your Children!! Fight for Trump!! Fight for America!! Fight for EVERYTHING… Enemies: #MSM #BarackObama #HillaryClinton #GeorgeSoros #JoeBiden #AndrewCuomo #GavinNewsom #NancyPelosi #BillDeBlasio.”

In its report, CREW characterized these and other posts by the user as “a clear call for a violent overthrow of the American government on January 6, 2021.”

Other posts made by the user included tips for protestors planning to attend the rally at the Capitol.

“TIPS FOR THE BRAVE AND COURAGEOUS PATRIOTS GOING TO DC TO FORCE CONGRESS TO REFUSE BIDEN’S RIGGED ELECTION,” one post said, including warnings such as “Keep MAGA gear hidden until AFTER checking in” at hotels.

“DC is very BLUE and a hotbed for ANTIFA/BLM. Stay with the large group, especially at night,” and “be wary” of D.C. police officers, the same user said.

“Biden will die shortly after being elected,” the account posted on Jan. 2, 2021. “Patriots are gonna tear his head off. Prison is his best case scenario.”

“We’re all on a mission to save America. Lone wolf attacks are the way to go,” read a post the following day. “Stay anonymous. Stay alive. Guns up Patriots!!”

In the report, CREW said that the delay in transmitting these threats to the USCP gives “the impression that the agency failed to do its job.”

The question to be drawn from this, CREW said, is: “Why did the agency wait two days, until after the Capitol had been breached and Congressional leaders were in hiding to pass it along?”

Attacks Against the Secret Service

The Secret Service has increasingly drawn ire from Democrats in recent months for its actions on Jan. 6 and for comments agents have made about what happened that day.

In June, the House Jan. 6 Committee called a last-minute hearing to listen to the testimony of Cassidy Hutchinson, a White House staffer who was several rungs below President Donald Trump in the White House hierarchy.

Hutchinson, who was a top aide for former Chief of Staff Mark Meadows, claimed to have intimate knowledge of the president’s movements on Jan. 6.

Her testimony, including claims that Trump had attacked Secret Service agents and lunged at the White House limousine driver after being told he could not join his supporters at the Capitol, immediately raised eyebrows among Republicans and other Trump allies. This skepticism was seemingly corroborated when reports surfaced that Secret Service agents in the limo that day were prepared to testify under oath that Hutchinson’s claims were false.

Despite the willingness of some Secret Service agents to testify, the Democrat-dominated Jan. 6 Committee has not heard the testimony.

Not long after the denial by agents, the Secret Service found itself in the sights of the panel.

In July, the Secret Service complied with a subpoena from the committee for documents and data from Jan. 6 and the weeks leading up to it. Absent from this cache of documents, however, were texts between agents that day, prompting claims by some Democrats that the Secret Service had, through incompetence or ill-intent, “erased” those messages.

The Secret Service denied the charge, with an agency spokesman contending that agents often do not use text messages to communicate during high-risk situations and that the lack of texts recovered by the subpoena may simply be explained by this procedural norm among the president’s bodyguards.

Despite denials of these past charges by the Secret Service, CREW’s report into the broader context of ongoing contentions over the Secret Service’s conduct on Jan. 6 and makes clear that CREW shares Democrats’ critical attitude on this front.

CREW—which was started by David Brock, a major Democrat Party operative—has in the past faced scrutiny from Republicans and other conservatives for its heavy slant toward Democrats, as the group has historically expended its efforts on attacking and criticizing Republicans and their allies.

“In the past month, we’ve learned that the Secret Service failed to prepare for violence on January 6 despite receiving explicit warnings, then deleted key evidence from the day, likely breaking the law,” CREW wrote in its report. “The delay in notifying Capitol Police about the threat to the Speaker of the House only adds to the impression that the agency failed to do its job, and leads to more questions.”

The Secret Service and Speaker Pelosi’s office did not respond to requests for comment.