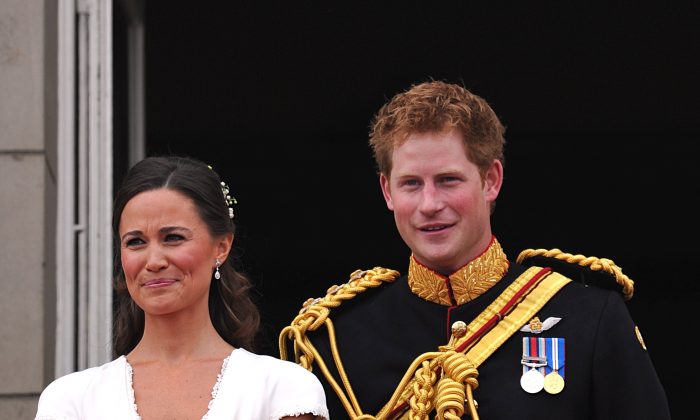 Best man Prince Harry and Maid of Honor Pippa Middleton on the balcony at Buckingham Palace after the Royal Wedding of Prince William to Catherine Middleton on April 29, 2011 in London, England. (Photo by John Stillwell-WPA Pool/Getty Images)
Entertainment

An article published by a U.S. magazine that claimed Prince Harry and Pippa Middleton were having a “secret romance” was ruled as misleading by the U.K.’s Independent Press Standards Organization (IPSO).

The complaint, Prince Henry of Wales v Mail Online, said the story written by OK!, published in 2015, alleged that Prince Harry and Middleton were “snogging in a bathroom at the royal wedding in 2011.”

The article claimed Middleton and Prince Harry were “romantically involved” and that she had “spent the night several times.” The story also alleged that Prince William had “found the pair in a compromising position,” and that Prince Harry had played “Adele, Ellie Golding, and Bruno Mars” during their first date, and served pasta carbonara that he had made himself.

In the complaint, Prince Harry said the Mail Online had repeated claims made in the U.S. magazine about his private life that were “completely untrue.”

“The claims made about the complainant and Ms. Middleton had the potential to intrude into his private life,” ruled IPSO.

This is the second story on the royals that has been labeled as violating IPSO’s code of ethics.

The organization also ruled that a front-page headline of a story by The Sun titled, “Queen Backs Brexit,” was misleading.