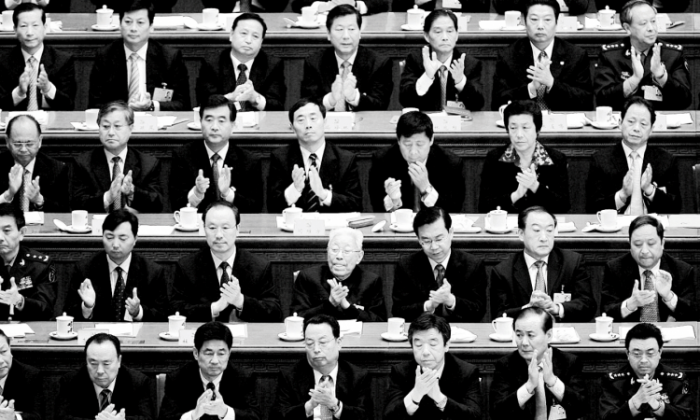 Chinese delegates applaud the result of a vote during the Chinese Communist Party Congress at the Great Hall of the People on October 21, 2007, in Beijing. (Andrew Wong/Getty Images)
China

A new political party that aims to create a constitutional democracy in China has caught some China watchers’ attention during intense political activity in the Middle Kingdom that hints at dramatic changes underway.

The Epoch Times has learned that some intellectuals and young scientists in Beijing recently formed a party called the “Chinese Scientist Liberal Democratic Party.” The guiding doctrine of the party is the universal value of democracy. It aims to use peaceful means to carry out a revolution from the central authority of the Chinese Communist Party (CCP) and dismantle the CCP internally in order to establish a constitutional democracy.

If the new party takes power, it would work to ensure Chinese citizens have freedom, political rights, and a sound legal system based on a constitution as the supreme law, with all citizens treated equally before the law. It would establish a constitutional government with separation of powers among the executive, legislative, and judicial branches.

It would also nationalize the military, which is now controlled directly by the Chinese Communist Party.

The Epoch Times was able to contact the head of this new party Liu Yi (alias), who said the party will announce its articles in the near future.

Xinhua, one of the Chinese regime’s official outlets, published on Feb. 23 a proposal from Party Central. The proposal was the first of its kind since the beginning of the CCP’s rule in China. It proposed to build a strong task force consisting of non-Party members, including democracy advocates, representatives of different religions and ethnic groups, and others. It would also recruit new talent from these organizations to work with the CCP.

According to a source who works within the CCP system, in the past non-Party members working for government agencies had no real power and only served decorative and propaganda purposes. Those non-Party members were also excluded from certain departments and professions, such as the military, media, and professions that require security clearance.

The Epoch Times reported earlier this month that key leaders in the CCP’s Politburo had reached consensus on four points that align with the aims of the new party:

1. A new constitution preparation committee, consisting of members from different communities, political parties, and organizations, will be formed to draft a new constitution that protects freedom of association and assembly.

2. It will be announced that the CCP has finished its historical mission as the ruling party, and its members should re-register with the option to quit or stay with it.

3. Redress and compensate “June 4,” Falun Gong, and all other groups and victims who were wrongly persecuted for dedicating themselves to the realization of China’s democracy.

4. Nationalization of the military.

The parallel announcements suggest that top leaders in the CCP are testing the waters for implementing a constitutional democracy and leaking related information to the media. In mid-April, Radio France Internationale (RFI) quoted an article by China in Perspective saying that Premier Wen Jiabao’s proposals for political reform and the redress of “June 4” had been passed.

RFI quoted Gao Yu, a Beijing journalist and two time Courage in Journalism Award winner, as saying that she has heard related news from someone working inside the CCP system.

A series of incidents reflect intense domestic conflicts in China, human rights lawyer Jiang Tiangyong said in an interview with The Epoch Times on April 26.

“Grievances of the people and escalating power struggle among high officials are all on the verge of explosion,” he said.

“Currently, there are complaints everywhere—on the bus, or at the restaurants—about fake goods and Party officials’ corruption and bribery. People are simply fed up.”

He pointed out that granting people’s wish for a country with democracy and rule of law is the path China must take.

“China is at a crossroads now and changes will soon take place.”