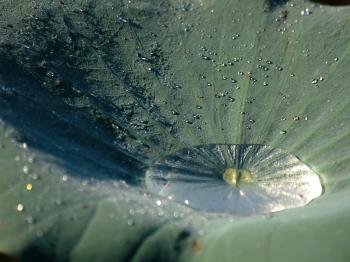 Hairs on the lotus leaf make it immune to being tainted. (Wang Jiayi/The Epoch Times)
Science

The ancient Confucian philosopher Zhou Dunyi once said, “I love the lotus for it grows from mud, but remains unblemished.”

Recently, scientists have discovered how the plant keeps itself clean and dry, and in doing so might have found a way to make better self-cleaning and low-drag materials.

The secret, according to a study in Physical Review Letters by Chuan-Hua Chen, who is an assistant professor of mechanical engineering and materials science at Duke University, and Jonathan B. Boreyko, a graduate student, lies in the subtle vibrations from nature and the lotus’s unique surface texture.

“We faced a tricky problem—water droplets that fall on the leaf easily roll off, while condensate that grows from within the leaf’s nooks and crannies is sticky and remains trapped,” said Boreyko in a press release.

The researchers videotaped a lotus leaf resting on top of an inexpensive loudspeaker from RadioShack at low frequency. They cooled the leaf to allow droplets to form on the surface. As soon as they made the loudspeaker vibrate at about 100 hertz for a fraction of a second, the sticky droplets on the leaf jumped off.

The researchers explained that the surface texture of the leaf is water-repellent. It is covered with tiny irregular bumps spiked with even tinier hairs. When a water droplet lands on this type of surface, it only rests on the ends of the tiny hairs. The droplet is held up by air pockets below and ultimately is repelled off the leaf.

“This solves a long-standing puzzle in the field,” said Chen. “People have observed that condensation forms every night on the lotus leaf. When they come back in the morning, the water is gone and the leaf is dry. The speaker reproduced in the lab what happens every day in nature, which is full of subtle vibrations, especially for the lotus, which has large leaves atop long and slender stems.”

Chen suggested that one possible application of the findings is to coat the interior of condenser pipes of the kind used to transfer heat in power plants. By maintaining water repellency, there would be less drag in the pipes and more flow and efficiency.

“We have revealed the physics behind anti-dew superhydrophobicity, a vital property for water-repellent materials to be deployed in the real world,” Chen said. “These materials will be used in humid or cold environments where condensation will naturally occur. Our findings point to a new direction to develop water-repellent materials that would survive in demanding natural environments, and have strong implications for a variety of engineering applications including non-sticking textiles, self-cleaning optics, and drag-reducing hulls.”

Chen’s research is supported by startup funds from the Pratt School of Engineering at Duke University.