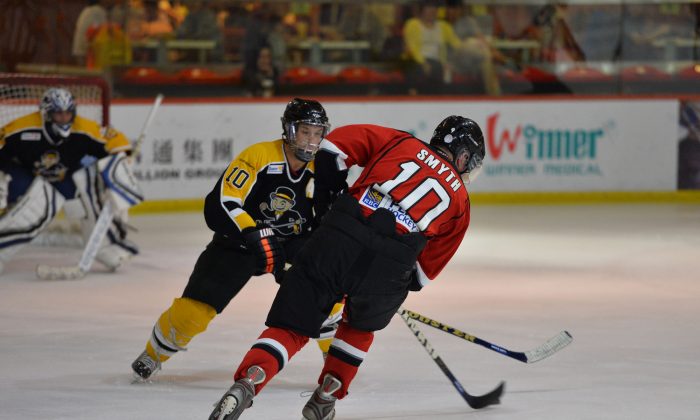 Kowloon Warriors number 10, Gregory Smyth is held up on his way to the Hong Kong Tycoons goal by his opposite number, Jacob Trost during the week-2 match Saturday Oct 12. (Bill Cox/Epoch Times)
International

In the second round of the China Ice Hockey League on Saturday Oct 12 held at Mega Ice the South China Sharks picked up their second win in succession to top the league with 4 points.

Meanwhile, the Hong Kong Tycoons beat the Macau Aces in a tight match for their first win, which moved them into second place on 3 points.

The first match of the night between the Kowloon Warriors and Hong Kong Tycoons got a bit rough and heated with 10 players sent to the sin bin. Tempers got worse as the match progressed.

The Tycoons got off to a flying start with a goal by Hampus Hubinette, but the Warriors fought back to equalise after just 55 seconds through Art Tam.

But, as the game settled down, it was clear that the Tycoons were playing in top form and were 3-1 up at the end of the first period—with further goals from Drew Barton and Jim Fanstone.

Tycoons kept up their dominance in the second period, pushing the score to 6-1 before the Warriors pulled one back through Daniel McLellan.

In a rather ill-tempered third period saw six players depart the ice mainly for periods of 2 minutes for roughing, and Greg Smyth of Warriors and Chris Belisle were both in the sin bin for 10 minutes for misconduct.

There was one score each in the third period by Bryan Crane of Warriors and Tip Fleming of the Tycoons, which saw the final result 7-2 to the Tycoons.

Jasen Awalt, the Warriors’ goalie, got a three star award for an amazing 61 saves.

The South China Sharks-Macau Aces match produced some great skating and, in stark contrast to the earlier match, clean high level play. The match was all square at 0-all after the first period and was tied at 1-all at the end of the second period with goals from Christian Long of Aces and Rick Chu of Sharks.

Sharks got ahead through Gordon So two minutes into the final period, but Aces pulled it level with a goal by Christian Long.

Sharks then scored twice in two minutes mid-way through the period, with goals by Hayes To and Justin Cheng pushing the score to 4-2. Macau tried their hardest to break the Sharks defence, but could not force another score.

Goalies Cody Drumm (Sharks) and Loron Orris (Aces) were both given three star awards for 34 and 35 saves respectively.