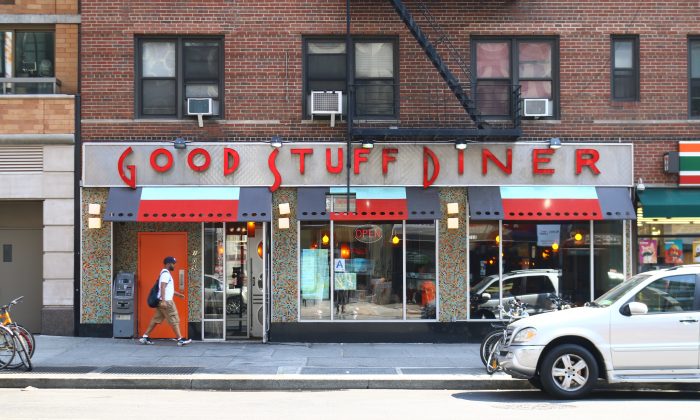 The outside of Good Stuff Diner in Chelsea, Manhattan, July 2. A confrontation occurred between two groups in the diner at 5 a.m. One man was shot in the chest. (Brendon Fallon/Epoch Times)
New York

NEW YORK—It looked like a normal morning in Chelsea. The inside of the Good Stuff Diner on 14th St., known for its Greek dinner specialties and over-stuffed sandwiches, was bustling with a relatively full house. Classy, elderly women sipped their coffee in the diner, as mothers took their children to the YMCA next door. Life went on as usual, although a violent shooting had occurred outside the diner earlier that morning.

A confrontation occurred between two groups in the diner at 5 a.m. The fighting escalated to shootings outside. One man was shot in the chest. He got himself a cab and drove off, according to witnesses.

There was a man, wounded in the torso, who arrived at St. Barnabas Hospital in the Bronx around the same time. Officials believe he is the same man who was shot outside of the diner. But the man is not cooperating with police to confirm details, according to NYPD.

In 2010, inside the same diner, a gang member fatally shot a victim multiple times in the head.

The shooting on Wednesday morning is one more incident added to the 21 shootings that occurred throughout the five boroughs over the past weekend.

The shootings at Good Stuff Diner occurred across the street from a children’s yoga class, the Pratt University campus, and blocks away from one of the most expensive private colleges in the nation, the New School.

Yet many people in the neighborhood did not seem shaken by the incident.

Ashok Chaundhry, an employee at the 7 Eleven next door to the diner, was mopping the floor when he heard the gun shot at 5 a.m. He assumed it was a firecracker. But as he glanced out the window, he saw an injured man across the street shooting in the direction of the diner. He watched the man get in the taxi.

Chaundhry recalled feeling no emotions as he witnessed the shooting. Then, an unsettling thought hit him as he recalled an episode from the day before.

Yesterday, a man had dilly-dallied for 15 minutes, apparently unable to decide on a hot dog to purchase. Chaundhry sternly told the man that he could not take up any more time, as a long line had gathered behind him.

The man grew angry and went behind the counter to shout at him. He challenged Chaundhry to a fight outside. “A shooting could have very well happened inside 7 Eleven,” he said. “I felt very empty when I thought of that. It’s like we’re not even humans.”

But life goes on as usual in the neighborhood.

“I live across the street,” said a female Good Stuff Diner customer who did not wish to be named.

Mothers continued to take their children to the YMCA next door to the diner.

David Pengilly, a YMCA member, saw the shooting happen from his home. “It has happened before,” he said. “I didn’t feel scared. It’s a big irritation.”

With reporting by Brendon Fallon