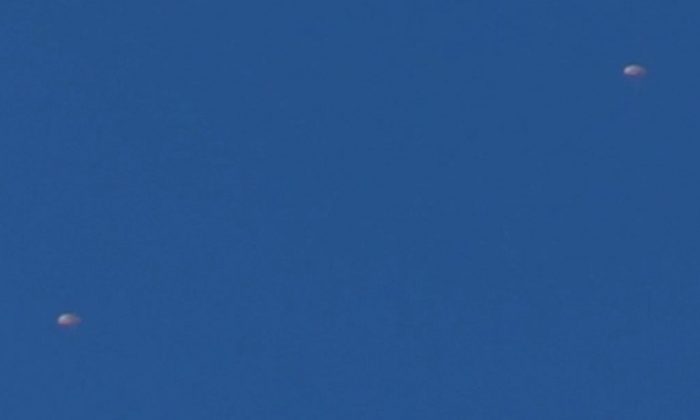 This frame grab from video by Haberturk TV shows two parachutes after a Russian warplane crashed on a hill as seen from Hatay province, Turkey, Tuesday, Nov. 24, 2015. Turkey shot down the Russian warplane Tuesday, claiming it had violated Turkish airspace and ignored repeated warnings. Russia denied that the plane crossed the Syrian border into Turkish skies. (Haberturk TV via AP)
Europe

Second Russian Airman Rescued From Syria, Says There Were No Warnings From Turkey

The Russian airman who was in the plane that was shot down by Turkey says he and his compatriot never received a warning from Turkish officials.

Turkey says it gave the men 10 warnings in five minutes before being forced to shoot down the plane as it violated Turkish airspace.

Speaking from the Russian Hemeimeem air base in Syria, near the border with Turkey, Murakhtin also said there was “no way” his jet violated Turkish airspace, because the crew knew the region “like the back of their hand.”

“It’s impossible that we violated their airspace even for a second,” he added to Russian reporters. “We were flying at an altitude of 6,000 meters in completely clear weather, and I had total control of our flight path throughout.”

Turkey says the jet and another aircraft were quickly approaching the border when it started giving warnings, and then the one jet crossed into Turkish airspace for 17 seconds. U.S. officials supported Turkey’s version of events.

Murakhtin was rescued by Syrian, Lebanese, and Russian special forces. The pilot of the downed jet was shot by rebels after parachuting out of the plane.

“The operation was concluded successfully. The [navigator] has arrived at our base and is alive and well,” Russian Defense Minister Sergei Shoigu told a ministry of defense meeting, according to the Guardian.

He thanked “all our guys, who worked through the night at huge risk to themselves.”

A helicopter was sent to search for the men initially, but was hit by rebel fire and forced to make an emergency landing. One of the marines on board was killed.