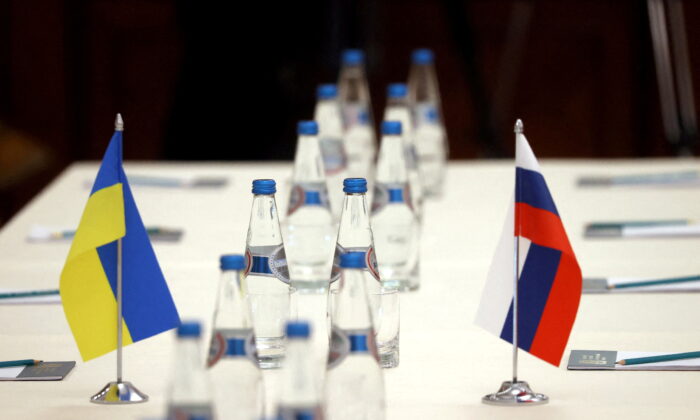 Russian and Ukrainian flags are seen on a table before the talks between officials of the two countries in the Gomel region, Belarus on Feb. 28, 2022. (Sergei Kholodilin/BelTA via Reuters)
Russia-Ukraine War

Second Round of Russia–Ukraine Talks Pushed to March 3: Russian Official

A second round of Russia–Ukraine talks were pushed to March 3, a Russian negotiator said Wednesday.

“We are waiting for them tomorrow,” Vladimir Medinsky, the head of the Russian negotiation, told Belarus state TV in Belovezha.

Alexey Arestovich, adviser to the Ukrainian Presidential Office, had told Hromadske TV that the meeting was going to take place on March 2.

The first round of talks took place in the Gomel region of Belarus, which shares borders with both Ukraine and Russia.

Ukraine is attempting to secure a deal that would include a ceasefire about a week after Russia invaded the neighboring country.

In an address just before the invasion, Putin announced a “special military operation” in Ukraine. The Russian president said he wanted to “demilitarize and denazify Ukraine, as well as bring to trial those who perpetrated numerous bloody crimes against civilians, including against citizens of the Russian Federation.”

Ukraine has described the invasion as unprovoked and many countries around the world have taken Ukraine’s side, sending it military assistance and imposing penalties against Russia and Russian officials.

Kuleba said Ukraine is “ready for talks, for diplomacy.”

“But we are not ready to accept any Russian ultimatums at all. When new talks will take place is unknown at the moment,” he added.

Dmitry Peskov, a spokesman for the Kremlin, said in Moscow that Russia’s delegation “will be in place to await Ukrainian negotiators.”

“Our delegation will be ready today to continue the discussion. I won’t announce the place, you will find out it sooner or later, but I don’t want to do it ahead of time,” Peskov added.

The initial talks ended without immediate results, though both sides indicated some common ground was reached on certain points.

Russia shifted tactics on Tuesday, bombarding sites in Kyiv and Kharkiv, leaving dozens dead and many others wounded.

Igor Konashenkov, a Russian defense official, said Russia captured the port city of Kherson in southern Ukraine, hours after a senior U.S. defense official told reporters on a call that Russia was in control of Berdyans’k, another port city, and Melitopol, just off the southern coast.