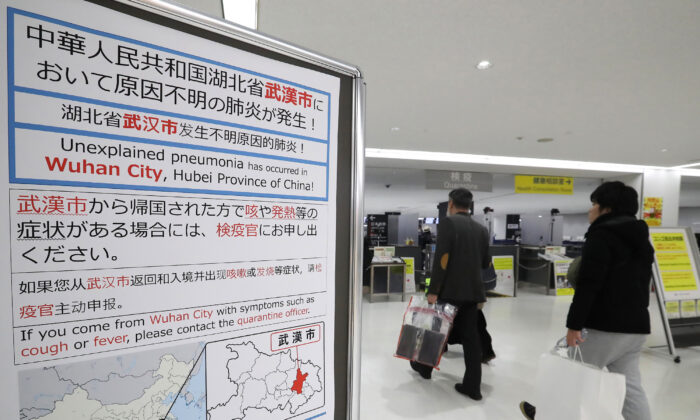 Passengers walk past a sign at Narita Airport in Chiba prefecture on January 16, 2020. Japan has confirmed a case of a mystery virus that first emerged in China and is from the same family as the deadly SARS pathogen, authorities said on January 16. (STR/JIJI PRESS/AFP via Getty Images)
By Cathy He

Chinese authorities announced a second death from a new type of pneumonia originating from the central city of Wuhan, as Japan confirmed its first case of the disease.

Wuhan health authorities said late Jan. 16 that a 69-year-old man, Xiong Moumou, who became ill on Dec. 31, 2019, had died. Xiong developed inflammation in his heart and abnormal organ function and died on Jan. 15.

He became the second patient to die from the new type of coronavirus—a family of virus that includes the common cold, SARS, and MERS. The first death occurred last week, a 61-year-old man who had other health issues.

The news came hours after Japanese health officials confirmed its first patient with the new coronavirus, becoming the second infection outside of Wuhan, after Thailand reported a case earlier this week.

The man, in his 30s, developed a fever and a cough while traveling in Wuhan on Jan. 3. After returning to Japan, he was hospitalized on Jan. 10 as his symptoms persisted, the Japanese Ministry of Health, Labor, and Welfare said.

Tests conducted on Jan. 14 confirmed he was carrying the same coronavirus as those infected in Wuhan. He has since been released from the hospital as his condition improved.

The man, reported by local media as a Chinese national, told Japanese health officials he didn’t visit the seafood market in Wuhan linked to the pneumonia outbreak, but that he had “close contact” with at least one person with pneumonia symptoms at a place where he had stayed during his visit.

The market, which also sold meat from exotic animals, has been closed since Jan. 1 for disinfecting.

In Thailand on Jan. 13, health authorities confirmed a 61-year-old Chinese woman visiting from Wuhan had contracted the virus. Health officials said the woman, who came down with symptoms on Jan. 5, hadn’t visited the seafood market, but had visited a smaller market in Wuhan, where live and freshly slaughtered animals were sold.

The World Health Organization (WHO) hasn’t reached a definitive conclusion on whether the virus could be spread among humans.

On Jan. 14, Maria Van Kerkhove, acting head of the WHO’s emerging diseases unit, said that it was possible the disease has “limited human-to-human transmission, potentially among families.”

The following day, the WHO Western Pacific stated in a series of Twitter posts that “there is no clear evidence of sustained human-to-human transmission and there are no infections reported among health care workers,” but “the fact that some cases do not seem to be linked with the Huanan seafood market means we cannot exclude the possibility of limited human-to-human transmission.”

Earlier this week, Wuhan authorities confirmed that among those infected were a husband and wife. While the husband worked at the market, the wife hadn’t been there recently.

The confirmation of new cases comes just ahead of the Lunar New Year, when hundreds of thousands of Chinese tourists are expected to travel around Asia. Health authorities across the region, including Hong Kong, Singapore, Japan, and Thailand, are on high alert, increasing screening at ports of entry, stockpiling protective gear, and preparing isolation beds.

The U.S. State Department issued a notice on Jan. 15, referring to an alert by the Centers for Disease Control and Prevention urging citizens traveling to Wuhan to avoid contact with animals, animal markets, or animal products, among other precautions.

Meanwhile, German researchers on Jan. 16 said they have developed the first diagnostic test for the new coronavirus. The test, which is being made available through the WHO, will allow labs to reliably diagnose the virus “within a very short period of time,” said Christian Drosten, director of the Institute for Virology at Berlin’s Charite hospital, whose team developed the test.