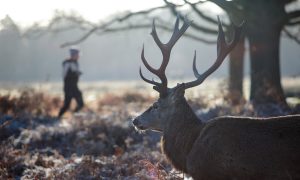 Stock photo of an ambulance in Toronto. (Michael Gil via Wikimedia Commons)
US News

A second man was found dead in the West Hollywood home of Democratic donor, Ed Buck, according to officials, which triggered protests near his apartment on Jan. 7.

Sheriff’s officials said they are also investigating the earlier death of another man in July 2017, when a young man overdosed on methamphetamine at Buck’s residence. It was ruled an accident.

The second man’s body was found at 1:05 a.m. at Buck’s apartment after someone called 911, said Los Angeles County Sheriff’s Deputy Charles Moore in a statement to The Associated Press. He said the homicide division is investigating, but he stressed the cause of death is still currently not known.

What is going on here? 🤔A second gay Black man has died at the home of wealthy democratic donor Ed Buck https://t.co/13N7l1BuKk pic.twitter.com/bq4QiF1L7R

Buck, 63, has been an advocate for lesbian and gay issues for a number of decades. He also donated $53,000 to Democratic candidates since 2008, according to federal election records. He donated to former President Barack Obama and former Secretary of State Hillary Clinton for their campaigns.

Buck was cleared in the death of Gemelle Moore, 26, a male prostitute whose body was found at the donor’s same apartment. Investigators said his death was the result of an accidental overdose of meth.

On Jan. 7, protesters gathered at Buck’s West Hollywood home, calling for his arrest.

Protesters gathering to call for the prosecution of prominent Democratic donor Ed Buck after two men separately die inside of his #WestHollywood apartment in less than two two years. One was a meth overdose. Protesters meeting in front of his building on Laurel Ave. @FOXLA pic.twitter.com/B0r4BCFtFP

“Arrest Ed Buck, prosecute Ed Buck, and then a jury needs to convict Ed Buck,” activist Jasmyne Cannick said, reported Fox News. “This man has had two dead bodies in his house, and he is still in his house.”

Another person added: “This man is a danger to our community.”

Attorney Seymour Amster, an attorney for Buck, stated that the unidentified victim was a “longtime friend” of the donor and knew him for 25 years. He said the victim “reached out for [Buck’s] help” on Sunday evening and started behaving “in a bizarre way” when he came to Buck’s home, Fox reported.

“As far as we’re concerned, this is an accidental death,” said Amster. Buck is not under arrest, he added.

A neighbor who lives near Buck told local station KTLA that she was walking her dogs at around 12:15 a.m. on Monday when she saw someone go into his home.

“I woke up to find out that he didn’t come out,” she was quoted by the news outlet as saying.

The sheriff’s office also told Fox they are taking another look at Moore’s death in the wake of the latest discovery.

Even though prosecutors declined to charge Buck over Moore’s death, officials discovered that Buck’s apartment was full of drug paraphernalia, including two-dozen syringes with brown residue inside, five glass pipes with residue and burn marks, a straw with residue inside, a bag with a piece of crystal-like substance, and clear plastic bags with powdery residue inside.

Moore’s journal also implicated Buck in his drug use.

Moore wrote in 2016: “I’ve become addicted to drugs and the worst one at that. Ed Buck is the one to thank. He gave me my first injection of crystal meth it was very painful, but after all the troubles, I became addicted…”

He also wrote in December of that year: “If it didn’t hurt so bad, I’d kill myself, but I’ll let Ed Buck do it for now.”