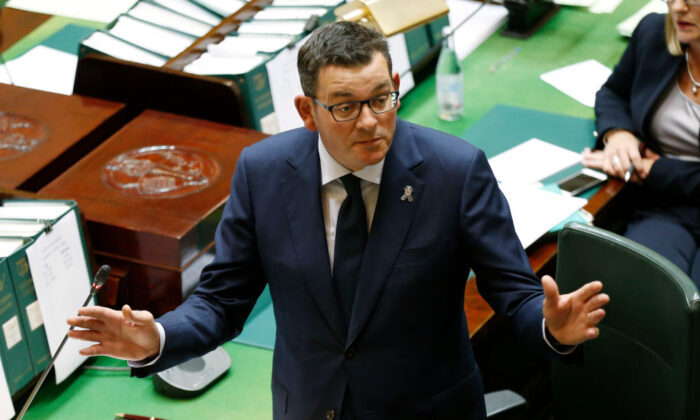 Second Major Australian Union Stands Against Beijing, Tells Victorian Premier ‘History Will Judge All of Us’

A leading member of Australia’s second-largest worker’s union has pleaded with the Victorian state premier to withdraw from its Belt and Road agreement with the Chinese Communist Party (CCP), saying “history will judge all of us” if it remains tied to Beijing.

Michael Donovan, head of the Victorian branch of the Shop, Distributive and Allied Employees Association (SDA) wrote a letter to Daniel Andrews, the state premier saying, “We reject the notion that somehow the Chinese people need and want an authoritarian government because they are too immature to govern themselves, and are not deserving the same rights we have.”

The letter, obtained by The Herald Sun on May 31, alluded to the SDA’s connection with Solidarity in Poland, a worker’s union which played a major role in the country’s transition to democracy and the eventual collapse of the communist regime.

“We played our part in bringing down the Iron Curtain and giving human rights to the people of eastern Europe and Russia,” wrote Donovan. “History will judge all of us. We want history to judge that we stood side-by-side with the Chinese people.”

According to Donovan, the SDA’s national leadership body adopted a motion supporting the “civic, labour and religious rights” of the Chinese people.

SDA is the second-largest union in Australia by membership with over 200,000 members. It is the largest private-sector union, representing mainly retail, fast food, and warehouse workers. The SDA is known for its collaborative approach to workplace negotiations which has been found to achieve for employees “outcomes that exceed retail employment conditions in other countries.”

The union’s stance complicates the Victorian Labor government’s support of the Belt and Road Initiative (BRI) as it is a major donor to the party and is linked to Deputy Premier James Merlino.

Victoria’s Daniel Andrews’ government has faced long-running pressure on his commitment to the Belt and Road Initiative, with state, national, and international political figures questioning the agreement.

SDA’s letter comes less than a month after one of Australia’s oldest unions, the Australian Worker’s Union (AWU) began a nationwide campaign calling for the prime minister to continue to “stand up to China’s bullying.”

The AWU campaign targeted the Chinese regime’s threats to impose major tariffs on Australian barley and beef at the time. The union believed the threats were in response to Australia’s investigations into illegal dumping of Chinese steel and aluminium in the Australian market.

Both the AWU and SDA form part of the Labor Party’s “right” faction considered to be more moderate and conservative than other factions. Previous Labor leader Bill Shorten was the national secretary of the AWU in the 2000s.

The SDA (or the Shoppers) is known for its historical involvement in the “Great Labor Split” of 1955 which saw the Australian Labor Party (ALP) split into two.

The events leading to the split centered on concerns over the increased influence and control by the Communist Party of Australia on the ALP.

The SDA was involved in a concerted effort to win back control of the ALP, however, along with three other unions, it eventually splintered off to form a new party, which would become the Democratic Labor Party. The split weakened the ALP and consigned it to opposition for 23 years.

The SDA’s stance and support of anti-communist efforts saw its long-standing National Secretary Joe de Bruyn receive an award from Poland’s president in 2015.

Even today its constitution states that the union opposes any person or group which “advocates, assists or encourages the overthrow by force or violence” of an established government, or opposes the growth of “doctrines” which could encourage the overthrow of the government.

SDA has faced challenges in recent times in the form of the alternative Retail and Fast Food Workers Union established in 2016. The union calls itself the “genuine fighting union” and argues SDA’s close relationship with major Australian businesses including Coles and McDonalds, has undermined the benefits received by workers.

How Marxists Took Over the American Labor Movement

Fairfax Media reports have also been critical of these relationships. SDA however has refuted these claims each time saying, “It is deeply disappointing that Fairfax has allowed itself to become a mouthpiece for the vested interests of an illegitimate organisation.”

Currently, the Retail and Fast Food Workers Union is not registered under the Fair Work Act.