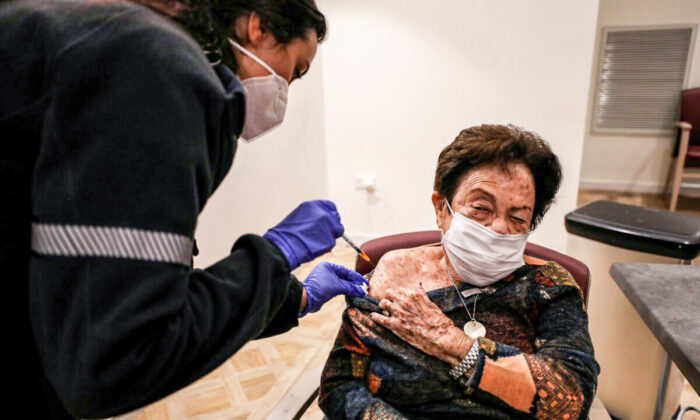 A second booster of Pfizer’s COVID-19 vaccine was linked to a lower mortality rate in people aged 60 or older, according to a new study from Israel.

Researchers examined data from a medical records system run by Clalit Health Services and found that the death rate among the elderly who received two boosters, or four total shots, was 0.03 percent.

The death rate among elderly who had gotten only a single booster shot was 0.1 percent.

“This study demonstrates a substantial reduction in COVID-19 mortality by the second-booster in eligible subjects,” the researchers, primarily employed by Clalit, wrote in the study.

The paper was published as a preprint ahead of peer review.

The study analyzed the fate of 563,465 Clalit members aged 60 to 100 who were eligible for a second booster. Approximately 58 percent received a fourth shot. Pfizer’s primary regimen of two shots has proven insufficient to protect against COVID-19, prompting Israeli authorities to clear first one booster, then two once protection from the initial one was shown to be waning.

While the death numbers were small in both groups, they show that “hundreds of lives were saved, and many more could have been saved, by the second booster,” Ronen Arbel of Clalit, one of the authors, told The Epoch Times in an email.

The period spanned from Jan. 10, or seven days after Israelis aged 60 and older could get a second booster, to Feb. 20.

Arbel said the people with infection-induced immunity were excluded because previous studies show a combination of natural immunity and a single dose of vaccination provides significant protection.

An earlier study from Israeli researchers found only potential “marginal benefits” for healthy, young health care workers from a fourth shot while a third paper concluded that protection from a second booster against infection waned rapidly.

The new study, which comes as the U.S. Food and Drug Administration weighs requests from Pfizer and Moderna for clearance for fourth shots, drew criticism from some.

Dr. Vinay Prasad, a professor of epidemiology and biostatistics at the University of California–San Francisco, noted that group members who received second boosters were more affluent and less likely to be Arab, among other confounding factors.

“We need randomized trials. All retrospective studies [are] guaranteed to have healthy user bias. They cannot adjust fully for differences,” he wrote on Twitter.

The study was released a day before Katherine O’Brien, an official with the World Health Organization, said during a talk hosted by Columbia University that reaching herd immunity with the COVID vaccines “is not possible” and warned against “rac[ing] into urgent policy decisions around giving additional booster doses.”

“I think it’s really important that we actually allow the vaccines to do what they should do,” which is protect against severe disease, O’Brien said, adding that the current data on more boosters leaves policymakers with “a relatively weak decision.”