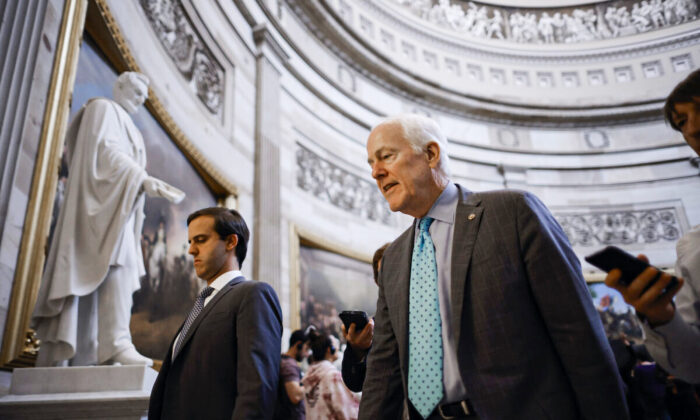 Following a speech on the Senate floor in support of the Bipartisan Safer Communities Act, Senate Minority Whip John Cornyn (R-Texas) talks to reporters as he walks through the U.S. Capitol Rotunda in Washington on June 23, 2022. (Chip Somodevilla/Getty Images)
US News

The U.S. Senate passed a bipartisan bill hailed as the most significant federal gun control legislation in decades Thursday night, but what’s in it has Second Amendment advocates concerned.

John Cornyn (R-Texas) led a group of 10 GOP senators to hammer out a compromise gun bill with 10 Democrats. Tuesday night, the Senate advanced the 80-page Bipartisan Safer Communities Act. Then on Thursday, 15 Senate Republicans joined Democrats to approve the measure by 65 votes to 33.

Provisions of the bill include school safety and encourage the use of juvenile records background checks for those 18-21 who want to buy a gun. Other measures focus on mental health, state crisis intervention programs, and incentives for red flag laws.

Cornyn, representing a state with an estimated 1.7 million people licensed to carry a firearm, was booed and jeered during a speech at the Texas GOP convention last week. Delegates were unhappy with his support for enhanced funding for red flag laws.

Here is a breakdown of the bill’s content and reaction from Second Amendment supporters:

Juvenile record checks are encouraged for those 18-21