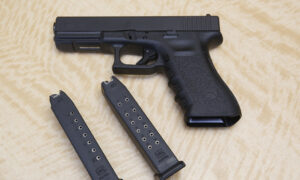 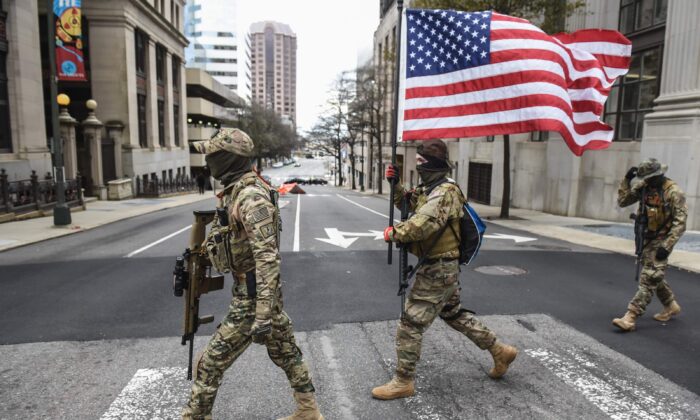 Members of a pro-gun group carry their weapons near the state Capitol in Richmond, Virginia, on Jan. 18, 2021. (Stephanie Keith/Getty Images)
Social Issues

Individuals identifying themselves as members of the Boogaloo Boys, the Proud Boys and the Black Panthers made an appearance to “express their rights” at the demonstration that took place in the state’s capital.

Virginians converge on the capitol each Lobby Day to petition state legislators on issues of public interest, but the day has been dominated by gun rights activists in recent years. It coincides with Martin Luther King Jr. Day, which honors the slain civil rights hero.

This year’s Lobby Day took place in a highly polarized climate, coming shortly after rioters and hundreds of protesters breached the U.S. Capitol building in Washington, D.C. The Jan. 6 incident disrupted debates in both the House and Senate as lawmakers were forced to shelter in place or evacuate, and police and security attempted to seize back control.

Acts of violence and lawlessness transpired as a minority of protesters holding Trump flags decided to unlawfully enter the Capitol building while the majority of protesters rallied outside, most in a peaceful manner. It is unclear who instigated the breach of the building.

Some critics have said that President Donald Trump, during a lunchtime Jan. 6 rally near the Capitol, incited violence—despite the president saying that the protesters should protest “peacefully and patriotically.”

Richmond last year passed a “red flag” bill days after a gun rights rally opposing the legislation drew at least 22,000 Second Amendment advocates from across the country. The ordinance prohibited firearms at or near permitted events. The legislation didn’t appear to be enforced as dozens of armed protesters walked through the streets of Richmond on Monday, reported Fox News.

Several protesters insisted that they simply wanted to stand up for Second Amendment rights.

“We’re showing up to remind them that we’re still here,” a gun-rights activist, who identified himself as “Trevor” told Reuters a day before the event.

“I’m a female who refuses to be a victim and the Second Amendment affords me the right to protect myself and take an active role in my own safety,” she said.

Virginia’s Capitol Square complex is expected to remain closed through Thursday, until after the scheduled inauguration of President-elect Joe Biden.

Richmond police said on Twitter late Monday that they had issued a summons to one man for possessing a concealed firearm without a permit, and had confiscated the gun.

The department didn’t immediately respond to a request for comment by The Epoch Times.