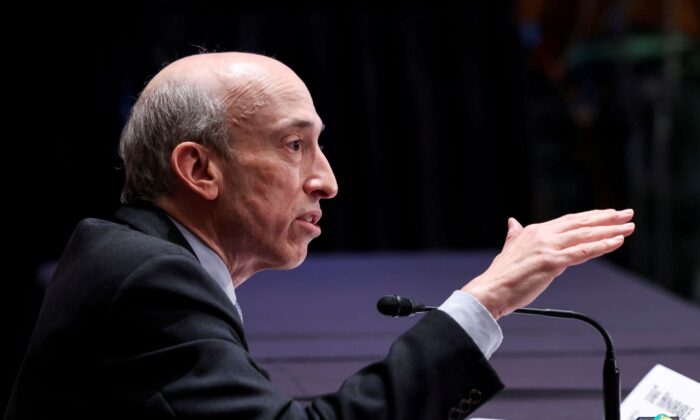 The U.S. Securities and Exchange Commission (SEC) released proposed rules on March 21 that would compel publicly traded companies to disclose a range of climate-related information to shareholders.

That information would include financially material climate-related risks as well as estimated greenhouse gas emissions, which were described by the SEC in a 500-plus-page document as “a commonly used metric to assess a registrant’s exposure to such risks.”

“Companies and investors alike would benefit from the clear rules of the road proposed in this release,” SEC Chairman Gary Gensler said in a statement.

“Our core bargain from the 1930s is that investors get to decide which risks to take, as long as public companies provide full and fair disclosure and are truthful in those disclosures,” he said. “Today, investors representing literally tens of trillions of dollars support climate-related disclosures because they recognize that climate risks can pose significant financial risks to companies, and investors need reliable information about climate risks to make informed investment decisions.

“Today’s proposal would help issuers more efficiently and effectively disclose these risks and meet investor demand, as many issuers already seek to do.”

As an explanation for the oft-cited demand from investors controlling trillions, the proposal cites requests from the world’s largest asset manager, BlackRock, as well as similar letters from Vanguard, State Street Advisors, and other large financial firms. Additionally, it draws attention to the Glasgow Financial Alliance for Net Zero, a coalition that represented more than $130 trillion in assets as of November 2021.

Elsewhere, the proposal cites a Washington Post editorial, multiple documents from the World Economic Forum, and BlackRock CEO Larry Fink’s 2020 letter to CEOs, which is one of a series of annual missives from the powerful executive demanding that companies comply with climate-related requests.

Hester Peirce, an SEC commissioner appointed by President Donald Trump, voiced her objections to the SEC’s proposal in a lengthy statement: “We Are Not The Securities and Environment Commission–At Least Not Yet.”

Peirce said financially material risks related to climate are accounted for by existing rules. She also argued that the proposal exceeds the SEC’s statutory authority and could constitute compelled speech, putting it at odds with the First Amendment.

“The placard at the door of this hulking green structure will trumpet our revised mission: ‘Protection of stakeholders, facilitating the growth of the climate-industrial complex, and fostering unfair, disorderly, and inefficient markets.’ This new edifice will cast a long shadow on investors, the economy, and this agency.

“Accordingly, I will vote ‘no’ on laying the cornerstone.”

John Cochrane, an economist at the Hoover Institution at Stanford University, told The Epoch Times via email, “This is way out of bounds of the SEC’s role to make markets transparent, and to require disclosure of material financial risks that managers know about.”

Cochrane has testified before the Senate Committee on Banking, House, and Urban Affairs about what he sees as the dangers of attempting to address climate change through financial regulation.

“Climate is really important. Climate is too important to let financial regulators play with it, inspired by what’s fashionable at Davos cocktail parties. Climate needs clear-headed, science-based, steady, and transparently enacted policy, with explicit cost-benefit analysis,” he said in written remarks to a March 18, 2021, hearing of that committee.

“It is a big step that now they want not only disclosure of so-called climate financial risks and transition risks, but also companies to calculate and ‘disclose’ their carbon emissions, plus those of suppliers, plus those of customers,” Cochrane told The Epoch Times.

Verdantix, a sustainability research firm, projects that the new rules will require the firms that it affects to invest in everything from climate strategy to digital processing, ultimately costing them $6.7 billion from 2023 through 2025.

“Verdantix believes that this will pose an additional challenge for issuers who may struggle to find the internal and external experts to implement a robust management system for SEC climate rule disclosures,” the company said in a statement.

“Investors, pension fund managers, and the public need better information about the physical and transition-related risks that climate change poses to hard-earned investments,” she said in a statement. “That’s why our Climate Crisis Action Plan recommended updating climate disclosure rules to ensure transparency about companies’ greenhouse gas emissions, and to give investors a better picture of the risks that climate change and extreme weather could pose to the companies in which they invest.”

Rep. Sean Casten (D-Ill.) emphasized what he sees as the importance of such regulations in a statement on the SEC’s release.

“Markets are an indispensable tool that we must leverage in order to make the transition from fossil fuels to cleaner energy at the pace scientifically necessary to prevent climate catastrophe. But for markets to work efficiently, investors need transparency,” he said.

Casten is lead sponsor of the Climate Risk Disclosure Act, which would mandate similar requirements from public companies, including estimates of greenhouse gas emissions. While that bill was approved by the House in June 2021, its Senate equivalent, S. 1217, hasn’t passed that body.

Casten said in a statement on the rule, “I urge the SEC to thoroughly evaluate feedback on the proposal issued today to ensure the strongest possible final rule.”

The proposed rules will be published on SEC.gov and in the Federal Register. A comment period on them will remain open for at least 60 days.