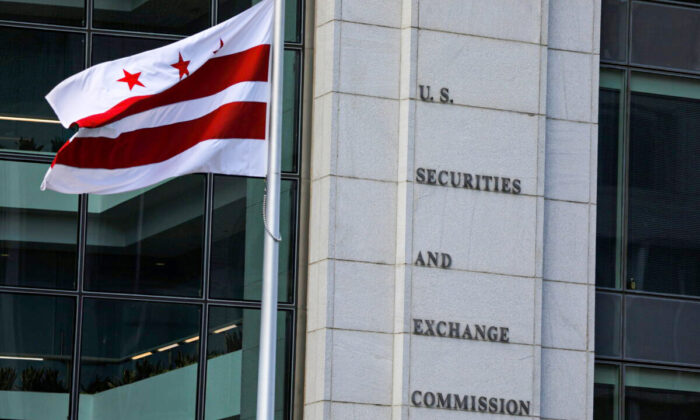 Signage is seen at the headquarters of the U.S. Securities and Exchange Commission (SEC) in Washington, D.C., U.S., May 12, 2021. REUTERS/Andrew Kelly
Constitutional Rights

The Securities and Exchange Commission’s (SEC) proposed rules to mandate climate-related disclosures from companies abridge freedom of speech and would “create controversy by imposing a political viewpoint,” a law professor wrote in a June 1 letter to the agency.

“It’s almost as though the three commissioners who pushed this rule forward don’t take seriously their oath to uphold and defend the Constitution,” Sean Griffith, a professor at Fordham University School of Law and author of the letter, said in a June 3 interview with The Epoch Times.

Griffith had previously joined many other law and finance professors in an April 25 letter to SEC objecting to the agency’s March 25 climate disclosure proposal.

The comment period for that proposal ends on June 17.

“The Proposal seems to be heavily influenced by a small but powerful cohort of environmental activists and institutional investors, mostly index funds and asset managers, promoting climate consciousness as part of their business models,” the professors wrote in the letter.

Griffith wanted to go beyond the letter and explain why he thinks the SEC’s climate disclosure approach conflicts with the First Amendment.

He made his case in the June 1 letter and a 73-page draft article, “What’s ‘Controversial’ About ESG? A Theory of Compelled Commercial Speech Under the First Amendment.”

“The proposed climate rules create controversy by imposing a political viewpoint, by advancing an interest group agenda at the expense of investors generally, and by redefining concepts at the core of securities regulation,” Griffith wrote in the June 1 letter.

“On the one hand, I object to these climate-related disclosures. But on the other hand, it’s kind of a wonderful thing that the SEC is trying to do this, because they’re actually pressing the limit in such a way that might actually trigger an answer to the question of, ‘Where is that limit beyond which the SEC can’t require stuff?’” he told The Epoch Times.

Commercial speech is less protected under the First Amendment than other forms of speech.

In Zauderer v. Office of Disciplinary Counsel of the Supreme Court of Ohio, the U.S. Supreme Court established a fairly low standard of scrutiny for rules compelling commercial speech, as long as the information disclosed is “purely factual and uncontroversial.”

Griffith thinks the SEC’s proposal shouldn’t be subject to this standard because it creates controversy by deviating from the agency’s core mission of protecting investors.

“The reason why the climate rules are so problematic is that either they’re politically driven—which is very plausible—or they are driven by this desire to appease the institutional asset manager community, which has its own profit interest because they generate revenue from the assets under management of those ESG portfolios. At the end of the day, it’s not about investors,” he told The Epoch Times.

According to Griffith, the potential rules also create controversy because they enforce viewpoint discrimination. They effectively force companies to endorse certain premises about human effects on the climate system.

Heightened financial risks that have some potential link to a warming effect from human carbon emissions—say, a rising rate of storms at some geographical location over the past few decades—are, by definition, already material. That reality raises questions about the value of broad new disclosure mandates for territory already covered under existing law.

The SEC’s rule proposal should be held to a tougher standard than Zauderer—either intermediate scrutiny or strict scrutiny, according to Griffith.

He also sees the proposal as part of a pattern of constitutionally dubious conduct by the politicized agency.

The 5th Circuit ruled on May 18 that the SEC’s use of administrative law judges violated the Seventh Amendment right to a jury trial.

While he and other legal scholars have raised serious concerns about the SEC’s climate disclosure proposal, some experts have defended its constitutionality.

He claimed that “even though opponents of the SEC’s climate disclosure initiative made it controversial well before the contours of the Proposal became known, this does not mean that the actual information required by the actual Proposal is controversial, burdensome, or unjustified.”

Although Georgiev said his analysis of the SEC’s enabling statute and practice support the agency’s proposed disclosures, he noted that First Amendment challenges could prove significant “not only for climate-related disclosure rules, but for other disclosure rules as well.”

Georgiev declined to comment to The Epoch Times on Griffith’s letter and article.

James Cox, a law professor at Duke University, told The Epoch Times on June 3 that a D.C. Circuit decision, National Association of Manufacturers v. SEC, has defined the parameters of this debate over the First Amendment and required disclosures.

The Dodd-Frank Act, passed by Congress in 2010, directed the SEC to compel companies to disclose whether minerals were ‘conflict free’—in other words, obtained from the Congo or an adjoining country without “directly or indirectly [financing] or [benefiting] armed groups” in the region.

The judge threw out that requirement.

“The statement was seen as potentially political or at least risking the speaker being ethically tainted,” Cox said.

He believes the constitutionality of the SEC’s compulsion of speech has yet to be resolved, arguing that it will depend in large part on how the final release is worded.

“Insofar as the rules do create a [First Amendment] issue, it doesn’t matter what the SEC says in its adopting release. The rules either violate the First Amendment or they don’t,” he said.

The prospective greenhouse gas disclosures, which he sees as just one of multiple controversial aspects of the proposal, bear no direct relationship to the finances of the affected companies.

“It seems to me that the only way they could make this uncontroversial is by dropping the [greenhouse gas] disclosure requirement altogether,” Griffith said.

The SEC declined to comment to The Epoch Times regarding Griffith’s paper.