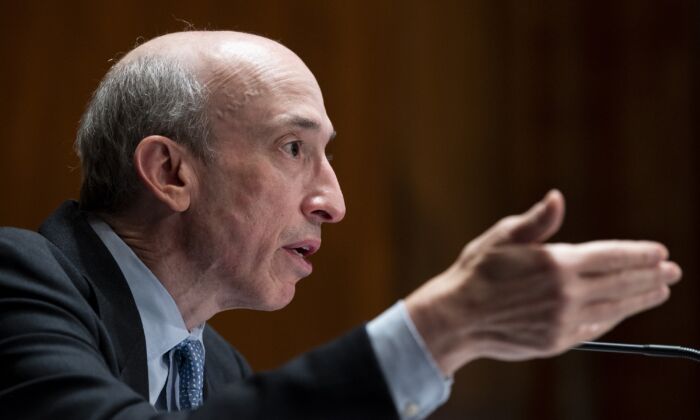 U.S. Securities and Exchange Commission Chairman Gary Gensler said he’s unclear about the prospect of reaching a deal with Beijing to prevent the mass delisting of Chinese companies whose shares are traded on American stock exchanges.

In a July 19 interview with Bloomberg, Gensler said the authorities in China are the ones who will ultimately decide whether to allow American regulators to review their full audit reports as required under U.S. law.

“I just really don’t know right now,” Gensler told Bloomberg, referring to the potential of reaching an agreement. “It’s going to be choices made by the authorities there.”

Conversations between the two countries had been “constructive,” Gensler added.

His remarks came as a 2024 delisting deadline is approaching, which was set by the Holding Foreign Companies Accountable Act. The bill was signed into law by former President Donald Trump in December 2020 after Congress passed it with rare bipartisan support.

The bill was adopted after an accounting scandal at Chinese chain Luckin Coffee Inc., emerged in early 2020. The Nasdaq-listed company was found to have “intentionally and materially overstated its reported revenue and expenses and materially understated its net loss in its publicly disclosed financial statements in 2019,” according to U.S. Securities and Exchange Commission (SEC).

Under the law, Chinese companies can be kicked off from the New York Stock Exchange and Nasdaq Stock exchange if they shirk requirements for three straight years.

A map on the PCAOB’s website showed China as the only country that doesn’t permit the agency’s “necessary access to conduct oversight.”

In March, the U.S. Securities and Exchange Commission began publishing the “provisional list” of companies that are at risk of being delisted. As of June, the list has grown to over 150 firms, including China’s commerce giants Alibaba, microblogging platform Weibo, and search engine Baidu.

YJ Fischer, the SEC’s international affairs chief, said in May that “significant issues remain” in reaching an agreement with Beijing.

Cathy He contributed to the report.