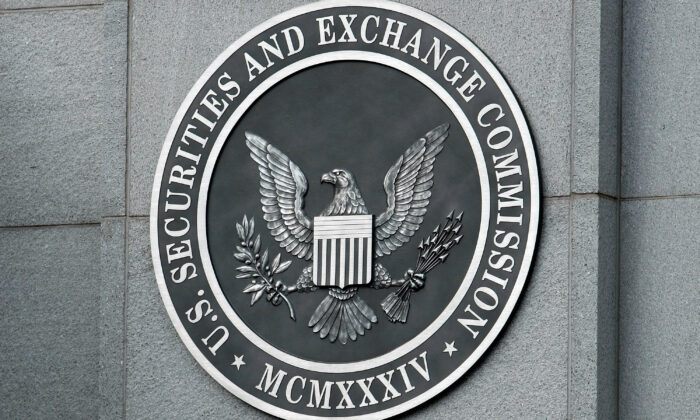 The U.S. Securities and Exchange Commission's seal in Washington on Sept. 18, 2008. (Chip Somodevilla/Getty Images)
US News

According to the SEC order on Sept. 21, Sheng Fu, the company’s CEO, and Ming Xu, its then-president and chief technology officer, jointly established a purported 10b5-1 trading plan after becoming aware of a significant drop in advertising revenues from the company’s largest advertising partner.

The company earned up to one-third of its revenues by placing within its applications third-party advertisements provided by its largest advertising partner, said the order.

Between the establishment of the trading plan on March 29, 2016, and the May announcement, Sheng Fu and Ming Xu sold 96,000 Cheetah Mobile American Depository Shares (ADS) under the trading plan, and avoided their personal losses of approximately $203,290 and $100,127, respectively.

Joseph G. Sansone, Chief of the SEC Enforcement Division’s Market Abuse Unit, commented, “While trading pursuant to 10b5-1 plans can shield employees from insider trading liability under certain circumstances, these executives’ plan did not comply with the securities laws because they were in possession of material nonpublic information when they entered into it.”

Despite this known negative trend in late 2015 and early 2016, during its quarterly conference call with analysts and investors in March 2016, Sheng Fu ascribed the “softness” in Cheetah Mobile’s first-quarter 2016 revenue guidance primarily to greater-than-expected “seasonality,” the SEC order stated.

Without admitting or denying the SEC’s findings, Sheng Fu and Ming Xu agreed to cease-and-desist orders in  undertakings relating to their future securities trading, and to pay civil penalties of $556,580 and $200,254, respectively, said the SEC press release.

Cheetah Mobile was founded in November 2010 by Fu Sheng. According to its official website, the company is committed to “Using technology to improve people’s lives in a world where humans and machines coexist.” It was listed on the New York Stock Exchange on May 8, 2014.

In 2015 and 2016, Cheetah Mobile was focused on developing mobile and computer applications, mobile games, and other content-driven products, stated the SEC order.