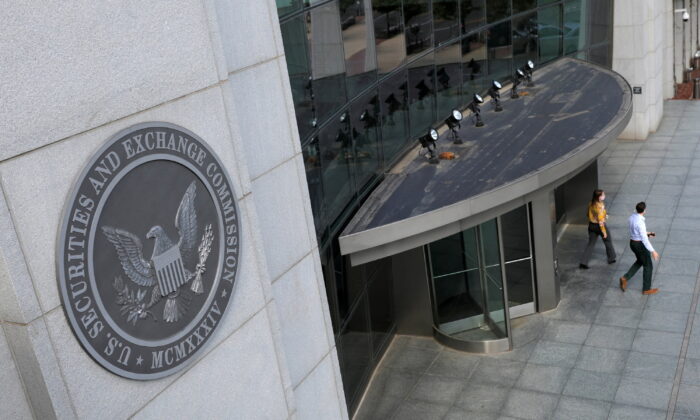 The headquarters of the U.S. Securities and Exchange Commission (SEC) in Washington on May 12, 2021. (Reuters/Andrew Kelly/File Photo)
Cryptocurrency

The U.S. Securities and Exchange Commission (SEC) has charged 11 individuals for creating a crypto pyramid and Ponzi scheme that raked in over $300 million from millions of global investors, including those from the United States.

In January 2020, Mikhail Sergeev, Sergey Maslakov, and “Jane Doe,” also known as Lola Ferrari, launched the website Forsage.io,
which allowed retail investors to carry out transactions using smart contracts that operated on the Binance, Tron, and Ethereum blockchains. Investors made profits by recruiting more people into this scheme, with Forsage using assets from new investors to pay older investors.

“Forsage is a fraudulent pyramid scheme launched on a massive scale and aggressively marketed to investors,” Carolyn Welshhans, Acting Chief of the SEC’s Crypto Assets and Cyber Unit, said in an Aug. 1 press release. “Fraudsters cannot circumvent the federal securities laws by focusing their schemes on smart contracts and blockchains.”

Despite facing cease-and-desist actions from the Securities and Exchange Commission of the Philippines in September 2020 and the Montana Commissioner of Securities and Insurance in March 2021, Forsage continued operations while denying the charges it was facing.

Individuals charged by the SEC include four founders of Forsage, three U.S.-based promoters engaged by the founders to promote Forsage, and multiple members from Crypto Crusaders, the biggest promotional group for Forsage that operated in the country.

The complaint has been filed in the District Court in the Northern District of Illinois, with the individuals being charged with violating the registration and anti-fraud provisions as listed in federal securities laws. The SEC is seeking injunctive relief, civil penalties, and disgorgement.

There is a push to tighten regulations and oversight of crypto markets in the United States. In June, Sen. Cynthia Lummis (R-Wyo) and Sen. Kirsten Gillibrand (D-N.Y.) unveiled a bill to regulate cryptocurrencies and other digital assets.

The draft version of the bill, S.4356, proposes legal definitions for virtual currencies and digital assets. Fully decentralized cryptocurrencies would be regulated by the Commodity Futures Trading Commission (CFTC) while digital assets classified as securities would be overseen by the SEC.

In May, the SEC announced the addition of 20 positions to the Crypto Assets and Cyber Unit that is responsible for protecting crypto market investors.

“By nearly doubling the size of this key unit, the SEC will be better equipped to police wrongdoing in the crypto markets while continuing to identify disclosure and controls issues with respect to cybersecurity,” SEC Chair Gary Gensler said in a May 3 press release.

In a report published on July 18, the FBI issued a warning to U.S. investors and financial institutions about cyber criminals potentially targeting them with fraudulent cryptocurrency schemes. The agency identified 244 victims of such schemes who have collectively lost $42.7 million.