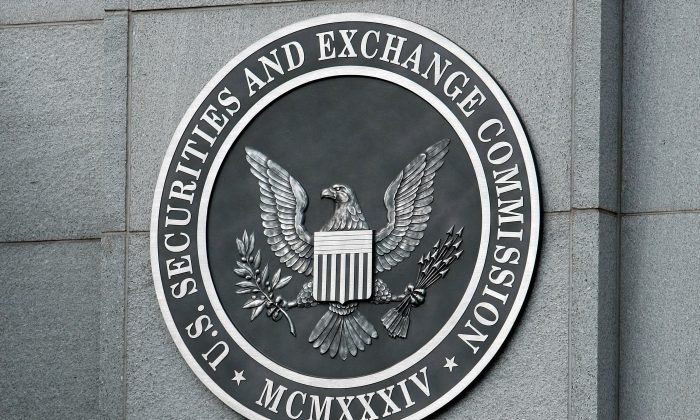 The U.S. Securities and Exchange Commission seal hangs on the facade of its building in Washington on Sept. 18, 2008. (Chip Somodevilla/Getty Images)
US-China Relations

The U.S. Public Company Accounting Oversight Board (PCAOB), the China Securities Regulatory Commission, and the Ministry of Finance have reached an agreement on the audit supervision of Chinese concept stocks, which Chinese media described as “great news for investors.” However, the SEC chairman warned that Chinese companies still face the risk of delisting if they don’t follow the rules.

On Aug. 26, SEC Chairman Gary Gensler issued a statement saying: “This agreement marks the first time we have received such detailed and specific commitments from China that they would allow PCAOB inspections and investigations meeting U.S. standards.”

However, the China Securities Regulatory Commission put forward various restrictions. An official, when answering reporters’ questions about the agreement, stated that the original working documents to be audited and other documents that the U.S. side asks to review are “obtained and provided through the assistance of the Chinese regulatory agency … and special processing procedures have been set up for specific data such as personal information.”

It is clear from Gensler’s statement that he is prepared for any cunning tricks from the Chinese authorities.

“Make no mistake, though: The proof will be in the pudding,” he said. “While important, this framework is merely a step in the process. This agreement will be meaningful only if the PCAOB actually can inspect and investigate completely audit firms in China. If it cannot, roughly 200 China-based issuers will face prohibitions on trading of their securities in the U.S. if they continue to use those audit firms.”

Jun Davy Huang, a Chinese economist based in the United States, told The Epoch Times that the Chinese Communist Party (CCP) is using a delaying tactic to gain advantage for itself.

“On the surface, the CCP agrees to meet the SEC’s requirements, but in terms of detailed operations, the SEC will still find it a bumpy road trying to obtain the required documents from the Chinese companies. There will be a few years of wrangling,” he said. “Because as long as this agreement is signed, it will take another three to five years’ of wrangling, during which time the Chinese companies are basically shielded from the risk of delisting.”

Huang pointed out that when China joined the WTO, the CCP used the same tactic.

China joined the WTO in 2001 and made a series of commitments in six major areas, including economic policy and removal of certain international trading barriers. However, the CCP’s various party regulations and policies are in clear contradiction with these international commitments.

For example, China promised that the central government will not directly or indirectly influence the business decisions of state-owned or state-invested enterprises. Yet, the CCP has a series of policies that mandate it has absolute leadership over Chinese companies.

Despite its infamous reputation of “not keeping promises,” the CCP has enjoyed all the benefits of China joining the WTO.

Wu Yaotian, director of the Shanghai Research Center of the World Trade Organization, admitted that the CCP’s accession to the WTO has brought many benefits, including the inflow of foreign capital, the expansion of China’s export markets, the reform and opening up of the economy, the reform of state-owned enterprises, the growth in domestic demand, and growth in domestic employment.

The U.S. PCAOB has tasted the bitterness first-hand of the CCP blatantly breaking its promises.

The U.S. PCAOB and the Chinese audit agency signed a “Memorandum of Understanding” in 2013, which authorized the U.S. PCAOB to obtain audit data from Chinese-funded enterprises.

However, in a 2016 pilot case, the CCP handed over heavily blacked-out audit papers and banned the PCAOB from viewing the records of U.S.-listed Chinese companies.

Moreover, when the PCAOB conducted inspections of Chinese companies, CCP officials insisted on attending the interviews.

In December 2018, then-SEC Chairman Jay Clayton issued a statement saying that both the SEC and the PCAOB “currently face significant challenges in overseeing the financial reporting for U.S.-listed companies whose operations are based in China … The business books and records related to transactions and events occurring within China are required by Chinese law to be kept and maintained there.”

In December 2021, the PCAOB said in an official report that, since signing the MOU in 2013, “Chinese cooperation has not been sufficient for the PCAOB to obtain timely access to relevant documents and testimony necessary to carry out our mission consistent with the core principles identified above, nor have consultations undertaken through the MOU resulted in improvements.”

In the face of the CCP’s broken promises, in March 2019, the U.S. Congress introduced the Foreign Company Accountability Act. The situation has changed dramatically since the law came into effect.

As of Aug. 27, 2022, 159 Chinese concept stocks have been included in the conclusive list by the SEC, including Weibo, Baidu, JD.com, Pinduoduo, Bilibili, NetEase, Ctrip, Kexing, Huaneng International, and other well-known China-based companies.

Companies placed on the conclusive list will be required to file the SEC’s required documents within three years, and if they fail to do so, they will be delisted after disclosing their 2023 annual report, in early 2024, according to the Foreign Company Accountability Act.

Dr. Wang Jun, a Chinese economist, told The Epoch Times that the CCP has no respect for international rules.

“If you raise money in another country, you have to be responsible to foreign investors, right? This is an obvious rule. On one hand, the CCP wants to raise capital and make money from others; on the other hand, it refuses to disclose its situation. Such a crazy era is now over. If you don’t follow the rules of the game, even if there are 1,000 listed Chinese companies, the SEC can delist them all,” Wang said.

In the latest statement on Aug. 26, SEC Chairman Gensler announced that the CCP agreed to four conditions in order to avoid the complete delisting of more than 200 Chinese concept stocks.

First, the PCAOB has independent discretion to select any issuer audits for inspection or investigation.

Second, the PCAOB gets direct access to interview or take testimony from all personnel of the audit firms whose issuer engagements are being inspected or investigated.

The PCAOB also has the unfettered ability to transfer information to the SEC, in accordance with the Sarbanes-Oxley Act.

Lastly, the CCP has allowed PCAOB inspectors to see complete audit papers without any redactions.

Gensler said frankly in his statement that, “Going forward, will our markets include China-based issuers? That still is up to our counterparts in China. It depends on whether they comply with the requirements of U.S. law, as detailed in the framework.”